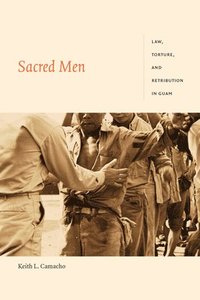 Law, Torture, and Retribution in Guam

"Sacred Men is a truly singular work of immense importance. It is original, compelling, and fiercely thought-provoking. Through a theoretical engagement with the Chamorro, Rotanese, and Saipanese indigenous epistemologies, Keith L. Camacho has brought the discussion of U.S. empire, law, sovereignty, militarism, and the working of carceral power to an entirely new horizon in ways no other scholar has done. A pathbreaking, field-shifting intervention." -- Lisa Yoneyama, author of * Cold War Ruins: Transpacific Critique of American Justice and Japanese War Crimes * "Exceedingly engaging, theoretically accomplished, and incisively researched, Sacred Men unravels the 1944 U.S. military tribunal in Guam, which included the prosecution and torture of Chamorro indigenes. Employing Agamben's homo sacer, Keith L. Camacho provides a razor-sharp analysis of the tribunal as a very real 'bare life' event but also as a metaphor for the murder, torture, and foreclosure of political life that has occurred throughout the colonies as 'states of exception.'" -- Brendan Hokowhitu, coeditor of * The Fourth Eye: Maori Media in Aotearoa New Zealand * "Provocative and engaging, Camacho's work not only breaks new ground in postcolonial and transpacific studies, but also calls attention to the role that Chamorro, Rotanese, and Saipanese indigenous epistemologies may play in the decolonization and deimperialization of US-occupied Guam." -- Y. Shu * Choice * "Author Keith Camacho is especially interested in developing an analysis of law, justice, incarceration, and punishment in colonial situations...and in weaving this theoretical apparatus into the longer and larger history of US colonial rule in both North America and abroad.... [P]ath-breaking work..." -- Glenn Petersen * Pacific Affairs *

Keith L. Camacho is Associate Professor of Asian American Studies at the University of California, Los Angeles, author of Cultures of Commemoration: The Politics of War, Memory, and History in the Mariana Islands, and coeditor of Militarized Currents: Toward a Decolonized Future in Asia and the Pacific.