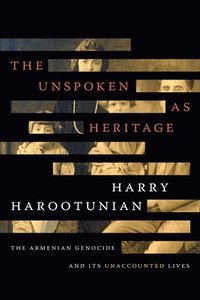 The Unspoken as Heritage

The Armenian Genocide and Its Unaccounted Lives

av Harry Harootunian
Häftad Engelska, 2019-11-29
239
Köp
Spara som favorit
Skickas inom 10-15 vardagar.
Fri frakt inom Sverige för privatpersoner.
Finns även som
Visa alla 2 format & utgåvor
In the 1910s historian Harry Harootunian's parents Ohannes and Vehanush escaped the mass slaughter of the Armenian genocide, making their way to France, where they first met, before settling in suburban Detroit. Although his parents rarely spoke of their families and the horrors they survived, the genocide and their parents' silence about it was a permanent backdrop to the Harootunian children's upbringing. In The Unspoken as Heritage Harootunian-for the first time in his distinguished career-turns to his personal life and family heritage to explore the genocide's multigenerational afterlives that remain at the heart of the Armenian diaspora. Drawing on novels, anecdotes, and reports, Harootunian presents a composite sketch of the everyday life of his parents, from their childhood in East Anatolia to the difficulty of making new lives in the United States. A meditation on loss, inheritance, and survival-in which Harootunian attempts to come to terms with a history that is just beyond his reach-The Unspoken as Heritage demonstrates how the genocidal past never leaves the present, even in its silence.
Visa hela texten

"The Unspoken as Heritage is a brave text offering something we all need: the recognition that a heritage shaped by catastrophe lingers, even thrives, in the unspoken and the everyday, rather than in the grand narratives of History. Harry Harootunian accounts for the unaccounted in the future tense, asking what should become of us as we live on in the wake of loss, rather than in the past tense of nationalist restoration. The rich and textured scraps of his parents lives, organized by ineradicable silence, here count for something potent: not the evidentiary, but the imaginative; not the exceptional, but the expectant." -- David Kazanjian, Professor of English and Comparative Literature, University of Pennsylvania "'Genocide' was first coined to portray the brutality of the Turkish state as it murdered the Armenian population living within its borders. Yet the Armenian genocide has become largely invisible, a part of history erased from common awareness. Harry Harootunian's chronicle of the Armenian genocide's impact on his family's hellish life forces us to reexamine what we do not know about our pasts and the causes and consequences of our ignorance. Through this remarkable account, Harootunian refuses to let his family die twice." -- Irene Silverblatt, Professor of Cultural Anthropology History, Duke University

Bloggat om The Unspoken as Heritage

Harry Harootunian is Max Palevsky Professor of History Emeritus at the University of Chicago; professor emeritus of East Asian studies at New York University; and the author of numerous books, most recently, Uneven Moments: Reflections on Japan's Modern History.