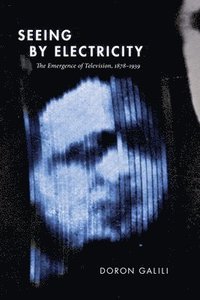 av Doron Galili
Häftad Engelska, 2020-02-28
279
Köp
Spara som favorit
Finns även som
Visa alla 2 format & utgåvor
Already in the late nineteenth century, electricians, physicists, and telegraph technicians dreamed of inventing televisual communication apparatuses that would "see" by electricity as a means of extending human perception. In Seeing by Electricity Doron Galili traces the early history of television, from fantastical image transmission devices initially imagined in the 1870s such as the Telectroscope, the Phantoscope, and the Distant Seer to the emergence of broadcast television in the 1930s. Galili examines how televisual technologies were understood in relation to film at different cultural moments-whether as a perfection of cinema, a threat to the Hollywood industry, or an alternative medium for avant-garde experimentation. Highlighting points of overlap and divergence in the histories of television and cinema, Galili demonstrates that the intermedial relationship between the two media did not start with their economic and institutional rivalry of the late 1940s but rather goes back to their very origins. In so doing, he brings film studies and television studies together in ways that advance contemporary debates in media theory.
Visa hela texten

"Digging into television's origins and discovering secret lineages and unexpected ancestors, Doron Galili unearths the true reasons that fiercely opposed-and indissolubly linked-television and cinema. A masterful contribution to media archeology." -- Francesco Casetti, author of * The Lumiere Galaxy: Seven Key Words for the Cinema to Come * "Assembling wonderful material and offering nuanced readings of both filmic and theoretical texts, Doron Galili makes important interventions in the ongoing debates over media specificity and television's historiography. He is part of a new generation of scholars who are helping to put television's complicated and often occluded genealogy into conversation with the latest media studies debates. A page-turner, Seeing by Electricity will resonate with a broad spectrum of readers." -- William Uricchio, Professor of Comparative Media Studies, MIT "Seeing By Electricity ... historicizes a prolonged moment, or a mediascape, when boundaries between media were porous, whereas the otherwise antagonistic relationships between media can be seen as symbiotic. From this perspective, the book challenges a commonly accepted historical narrative, and suggests instead a more flexible and broader contextualization of radio, television, and film as mutually contributing networks." -- Rea Amit * Critical Inquiry * "Galili's writing is flowing and engaging which makes the book an interesting read not only for scholars of television and media but for anyone who is interested in the field and the development of the technology. In the world where questions about media and media specificity arise again with the introduction of streaming services, looking at the way film, radio and early television interact gives an insight into intermediality. A valuable perspective for our post-cinema and post-television era." -- Julia Stolyar * Early Popular Visual Culture * "Seeing by Electricity is a major contribution to the rapidly developing field of media archaeology. Galili pays appropriate obeisance to theorists including Siegfried Zielinski and Mary Ann Doane, but he grounds his arguments firmly in deeply researched historical accounts of optical devices and electrical instruments, conceptions of vision, imperial fantasies and utopian imaginaries.... Galili succeeds with aplomb." -- John Wyver * Critical Studies in Television * "Seeing by Electricity offers its reader a nuanced and digestible consideration of the forces, entities, and contexts that shaped the conception, development, and perception of television in the United States and Europe from the late 1870s until the late 1930s." -- Laura C. Brown * Media Industries * "Galili's careful attention to the nineteenth and early twentieth century makes Seeing By Electricity a kind of escape to the past. As such it is an especially good pandemic read, allowing us to travel backwards whiles nevertheless speaking to our present landscape of video calls, online cocktail parties, remote learning, telecommuting, and binge-watching-all accelerated and amplified by social distancing and stay at home orders." -- Alison Reiko Loader * Nineteenth Century Theatre and Film * "The book is well written and offers interesting glimpses of the early fascination with television..." -- J. M. King * Choice * "From time to time a book in one's field of research comes along and you pick it up and cannot put it down. This is one such book.... What Galili has achieved is not just a technology-focused account ... but one which engages with cultural, economic, social, and political contexts also." -- Jamie Medhurst * Historical Journal of Film, Radio and Television * "Seeing by Electricity is a genuinely unique effort that is easy to read yet thought-provoking.... Seeing by Electricity is of tremendous value to those interested in television history, film and art theory, media and communications or c

Doron Galili is Researcher in the Department of Media Studies at Stockholm University and coeditor of Corporeality in Early Cinema: Viscera, Skin, and Physical Form.