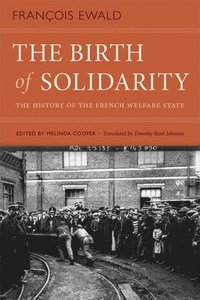 The Birth of Solidarity

The History of the French Welfare State

av Francois Ewald, Melinda Cooper
Häftad Engelska, 2020-05-08
249
Köp
Spara som favorit
Skickas inom 7-10 vardagar.
Gratis frakt inom Sverige över 159 kr för privatpersoner.
Finns även som
Visa alla 2 format & utgåvor
Francois Ewald's landmark The Birth of Solidarity-first published in French in 1986, revised in 1996, with the revised edition appearing here in English for the first time-is one of the most important historical and philosophical studies of the rise of the welfare state. Theorizing the origins of social insurance, Ewald shows how the growing problem of industrial accidents in France throughout the nineteenth century tested the limits of classical liberalism and its notions of individual responsibility. As workers and capitalists confronted each other over the problem of workplace accidents, they transformed the older practice of commercial insurance into an instrument of state intervention, thereby creating an entirely new conception of law, the state, and social solidarity. What emerged was a new system of social insurance guaranteed by the state. The Birth of Solidarity is a classic work of social and political theory that will appeal to all those interested in labor power, the making and dismantling of the welfare state, and Foucauldian notions of governmentality, security, risk, and the limits of liberalism.
Visa hela texten

"Ingenious and trenchant, Francois Ewald's The Birth of Solidarity offers an arresting insight into the politicization of probability. Abounding in legal and historical detail, the book deftly demonstrates how industrial power integrated French society by assuming the risk of accidents. Ewald's critical theory of the rules of judicial decision-making is a tour de force. His critique of law brilliantly unveils the birth of the twentieth-century insurantial society that is now itself at risk." -- Bernard E. Harcourt, author of * The Illusion of Free Markets: Punishment and the Myth of Natural Order * "Francois Ewald's seminal book is not only a major contribution to the history of the welfare state but a significant work of social and political theory in its own right, notably in the way Ewald applies a Foucauldian perspective to understanding the significance of concepts such as responsibility, insurance, and solidarity to modern forms of government. The Birth of Solidarity is a landmark in French political thought." -- Michael C. Behrent, coeditor of * Foucault and Neoliberalism * "This very important text covers some familiar ground but is set in a rich context of political theory that sheds light on current challenges to the welfare state. Highly recommended. Advanced undergraduates through faculty." -- J. D. Moon * Choice *

Francois Ewald is International Research Fellow at the University of Connecticut School of Law, chair of the Scientific Committee of the Universite de l'Assurance, and the author and coeditor of several books in French. Melinda Cooper is Professor of Sociology at the Australian National University. Timothy Scott Johnson is Visiting Assistant Professor of History at Texas A&M University, Corpus Christi.