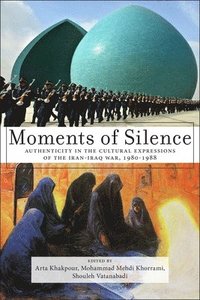 Authenticity in the Cultural Expressions of the Iran-Iraq War, 1980-1988

av Arta Khakpour, Shouleh Vatanabadi, Mohammad Mehdi Khorrami
Häftad Engelska, 2016-12-06
269
Köp
Spara som favorit
Skickas inom 7-10 vardagar.
Gratis frakt inom Sverige över 159 kr för privatpersoner.
Finns även som
Visa alla 1 format & utgåvor
Explores how writers, filmmakers and artists have attempted to reckon with the legacy of a devastating war The Iran-Iraq War was the longest conventional war of the 20th century. The memory of it may have faded in the wake of more recent wars in the region, but the harrowing facts remain: over one million soldiers and civilians dead, millions more permanently displaced and disabled, and an entire generation marked by prosthetic implants and teenage martyrdom. These same facts have been instrumentalized by agendas both foreign and domestic, but also aestheticized, defamiliarized, readdressed and reconciled by artists, writers, and filmmakers across an array of identities: linguistic (Arabic, Persian, Kurdish), religious (Shiite, Sunni, atheist), and political (Iranian, Iraqi, internationalist). Official discourses have unsurprisingly tried to dominate the process of production and distribution of war narratives. In doing so, they have ignored and silenced other voices. Centering on novels, films, memoirs, and poster art that gave aesthetic expression to the Iran-Iraq War, the essays gathered in this volume present multiple perspectives on the war's most complex and underrepresented narratives. These scholars do not naively claim to represent an authenticity lacking in official discourses of the war, but rather, they call into question the notion of authenticity itself. Finding, deciding upon, and creating a language that can convey any sort of truth at all-collective, national, or private-is the major preoccupation of the texts and critiques in this diverse collection.
Visa hela texten

Stories of the life experiences of religious minorities, refugees, displaced and exiled population, prisoners, children, women, and the diverse ethnicities of both Iran and Iraq, during the war, were ignored and neglected in the official histories. Moments of Silence: Authenticity in the Cultural Expressions of the Iran-Iraq War, 1980-1988 is an attempt to reflect parts of that untold story ... the book offers some essays that are a substantive contribution to the literature of the war and the Middle East. Those who wish to broadly understand different aspects of the Iran-Iraq war will benefit from reading it. -- International Journal of Communication

Arta Khakpour studied modern Persian literature at NYU's Department of Middle Eastern and Islamic Studies, where he defended his dissertation, ""Each Into a World of His Own: Mimesis, Modernist Fiction, and the Iranian Avant-Garde."" His research examines the role of literary magazines and salons in developing modernist fiction in post-Reza Shah Iran, focusing particularly upon their theoretical and literary interventions in the evolution of anti-realist narrative techniques. His articles are featured in the journals Iranian Studies and Middle East Literatures, and in 2013, he worked as the archive consultant for Asia Society's award-winning Iran Modern exhibition. Shouleh Vatanabadi teaches Global Cultures in the Global Liberal Studies Program at NYU. She has been a member of NYU fulltime faculty since 1991. Her areas of specialization include: Cultral Studies; Middle East Studies; Iranian and Turkish Studies; Women's Studies; Transnational and Postcolonial Studies. Her current work focuses on the intersections of cultural studies and the politics of translation of the Middle East and the global South-North and South - South cultural flows. She is the co-editor and translator of the award winning book, A Feast in the Mirror: Stories by Contemporary Iranian Women (Boulder: Lynn Rienner Publishers, 2000) and, Another Sea, another Shore: Persian Stories of Migration (Northampton, MA: Interlink Publishing Group, 2004). Among her recent articles are, "Stories beyond Histories, Translations Beyond Nations" in Critique: Critical Middle Eastern Studies, Vol. 18 (2) 2009, and "Translating the Transnational" in Cultural Studies, (special Issue: Transnationalism and Cultural Studies), Vol. 23(5&6) 2009, "Uneven Bridge of Translation: Turkey in between East and West" the Cultural Politics of the Middle East in the Americas eds. Ella Shohat and Evelyn Alsultany, University of Michigan Press, 2013. Mohammad Mehdi Khorrami is Professor of Persian language and literature at New York University. His research field is contemporary Persian fiction. His new book, Literary Subterfuge and Contemporary Persian Fiction: Who Writes Iran? (2014) focuses on identifying classical and modern rhetorical and aesthetic dynamisms and their functions in forming literary discourses. His publications include Modern Reflections of Classical Traditions in Persian Fiction (2003), Sohrab's Wars: Counter-Discourses of Contemporary Persian Fiction (tr. & ed., 2008), A Feast in the Mirror: A Collection of Short Stories by Iranian Women (co-ed., & co-tr., 2000) and Another Sea, Another Shore: Persian Stories of Migration (co-ed., & co-tr., 2003). He is the founder and co-director of The Association for the Study of Persian Literature (www.persian-literature.org).