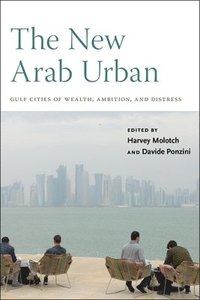 av Harvey Molotch, Davide Ponzini
Häftad Engelska, 2019-02-05
334
Köp
Spara som favorit
Finns även som
Visa alla 1 format & utgåvor
Cities of the Arabian Peninsula reveal contradictions of contemporary urbanization The fast-growing cities of the Persian Gulf are, whatever else they may be, indisputably sensational. The world's tallest building is in Dubai; the 2022 World Cup in soccer will be played in fantastic Qatar facilities; Saudi Arabia is building five new cities from scratch; the Louvre, the Guggenheim and the Sorbonne, as well as many American and European universities, all have handsome outposts and campuses in the region. Such initiatives bespeak strategies to diversify economies and pursue grand ambitions across the Earth. Shining special light on Dubai, Abu Dhabi, and Doha-where the dynamics of extreme urbanization are so strongly evident-the authors of The New Arab Urban trace what happens when money is plentiful, regulation weak, and labor conditions severe. Just how do authorities in such settings reconcile goals of oft-claimed civic betterment with hyper-segregation and radical inequality? How do they align cosmopolitan sensibilities with authoritarian rule? How do these elite custodians arrange tactical alliances to protect particular forms of social stratification and political control? What sense can be made of their massive investment for environmental breakthrough in the midst of world-class ecological mayhem? To address such questions, this book's contributors place the new Arab urban in wider contexts of trade, technology, and design. Drawn from across disciplines and diverse home countries, they investigate how these cities import projects, plans and structures from the outside, but also how, increasingly, Gulf-originated initiatives disseminate to cities far afield. Brought together by noted scholars, sociologist Harvey Molotch and urban analyst Davide Ponzini, this timely volume adds to our understanding of the modern Arab metropolis-as well as of cities more generally. Gulf cities display development patterns that, however unanticipated in the standard paradigms of urban scholarship, now impact the world.
Visa hela texten

The book offers an invaluable survey of the topic, and a guide to a vast literature on this increasingly important region that is largely absent from urban studies as a whole. -- Urban Studies The region's urbanization has had a profound global influence on the worlds of architecture and urban planning, and on what urban megaprojects are more broadly expected to do in an economy or society... The Gulf, as [the contributors] claim in The New Arab Urban, is not just a passive recipient of urban policy, but a key site of production. -- Public Books With a firm perspective on regional context and urban specificity, this collection of original essays offers a range of grounded conceptual narratives on architecture, urban planning, consumption, work and daily life in a group of cities--specifically, Abu Dhabi, Doha, Dubai and Masdar--that embody the phenomenon that is 'the new Arab urban'. * International Journal of Urban and Regional Research * Despite the academic interest that the spectacular new 'cities' in the Arab Gulf have garnered lately, this fascinating book argues that our tried-and-tested theories fall short in understanding them or learning from their rapid urbanization. The various essays propose different approaches to considering this old/new form of urbanity, but, together with the editors critical conclusion, expand the domain of urban study itself to draw concepts like mobility, transience, complexity, hybridity, contradiction, spontaneity, and even unpredictability into its interpretive paradigms. The book simply aims to achieve for the study of the 'Gulf city' the same kind of perspectival adjustment that Janet Abu Lughod accomplished for the 'Islamic city.' -- Nasser Rabbat,Author of Mamluk History Through Architecture: Monuments, Culture and Politics in Medieval Egypt Molotch and Ponzini promise us 'analytical shock therapy,' and that is what this book delivers. Inspired by Learning from Las Vegas, they ask us to set aside preconceptions, showing that cities really can be created with land monopoly and a potent mix of spectacle, inequality and authoritarianism. Whats more, these are not one-offs, but test beds for new globalizing forms of city building, as they are emulated and exported. There is urgent need to understand them, and for disquiet. -- Michael Storper,Co-author of The Rise and Fall of Urban Economies: Lessons from San Francisco and Los Angeles The New Arab Urban is a magisterial account of the densely settled Arab Gulf... a memorable work on the urbanization of the Arab Gulf, one that will be indispensable to future research and scholarship on the region. * Global Policy Journal *

Harvey Molotch is Professor of Sociology at New York University. His books include the classic, Urban Fortunes (with John Logan) and more recently, Against Security: How We Go Wrong at Airports, Subways, and Other Sites of Ambiguous Danger. Davide Ponzini is Associate Professor of Urban Planning at the Department of Architecture and Urban Studies at Politecnico di Milano, Italy. He is the author (with Pier Carlo Palermo) of Place-making and Urban Development, and (with photographer Michele Nastasi), Starchitecture: Scenes, Actors, and Spectacles in Contemporary Cities.