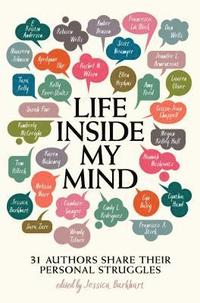 Life Inside My Mind

av Amber Benson, Maureen Johnson, Robison Wells, Lauren Oliver, Jennifer L Armentrout
Häftad Engelska, 2019-04-18
119
Köp
Spara som favorit
Skickas inom 3-6 vardagar.
Fri frakt inom Sverige för privatpersoner.
"Who better to raise teens' awareness of mental illness and health than the YA authors they admire?" -Booklist (starred review) "[A] much-needed, enlightening book." -School Library Journal (starred review) Your favorite YA authors including Ellen Hopkins, Maureen Johnson, and more recount their own experiences with mental health in this raw, real, and powerful collection of essays that explores everything from ADD to PTSD. Have you ever felt like you just couldn't get out of bed? Not the occasional morning, but every day? Do you find yourself listening to a voice in your head that says "you're not good enough," "not good looking enough," "not thin enough," or "not smart enough"? Have you ever found yourself unable to do homework or pay attention in class unless everything is "just so" on your desk? Everyone has had days like that, but what if you have them every day? You're not alone. Millions of people are going through similar things. However issues around mental health still tend to be treated as something shrouded in shame or discussed in whispers. It's easier to have a broken bone-something tangible that can be "fixed"-than to have a mental illness, and easier to have a discussion about sex than it is to have one about mental health. Life Inside My Mind is an anthology of true-life events from writers of this generation, for this generation. These essays tackle everything from neurodiversity to addiction to OCD to PTSD and much more. The goals of this book range from providing a home to those who are feeling alone, awareness to those who are witnessing a friend or family member struggle, and to open the floodgates to conversation.
Visa hela texten

Gr 9 Up-In this much-needed, enlightening book, 31 young adult authors write candidly about mental health crises, either their own or that of someone very close to them. Ranging from humorous to heartbreaking to hopeful, each story has a uniquely individual approach to the set of circumstances that the writer is dealing with. Many authors address readers in the second person, inviting them to imagine what it's like to live a day inside their heads. The symptoms of anxiety, depression, obsessive-compulsive disorder, and addiction are frequently discussed. Readers will learn of the many different ways these conditions can be present and in which they often work together. Despite the intense emotional content, teens will warm to the authenticity apparent in every voice. Many, if not most of the essays offer a list of the techniques and treatments that have been successful in handling symptoms, including medication, therapy, exercise, and yoga. The difficulty in recognizing mental health issues, as well as the unfortunate stigma associated with asking for help, is frequently acknowledged and may help teen and adult readers work toward achieving a more open dialogue. Perhaps most importantly, the collection's overarching sentiment points toward acceptance and the idea that treatment is a journey. As contributor Tara Kelly writes: "If anxiety gets the better of me again, that's okay. I give myself permission to fall down and get back up." VERDICT A first purchase for all young adult collections.-Kristy Pasquariello, Wellesley Free Library, MA -- School Library Journal, Starred Review * February 1, 2018 * From anxiety attacks and depression to obsessive-compulsive disorder (OCD), bipolar disorder, and drug and alcohol addiction, each of the authors (many of whom teens will recognize) pens an essay describing their experiences with mental illness. Some write of their suicidal tendencies; others share their struggles with ADHD. Authors describe such issues as how they learn to recognize the symptoms that signal a recurrence of their symptoms, and how they employ coping mechanisms that enable them to continue with their lives. These include medication and therapy, yoga, exercise, meditation, and help from health professionals. Other writers describe what it is like to care for a loved one with mental illness: Dan Wells caring for a beloved grandfather with Alzheimer's, Ellen Hopkins bringing up a grandson damaged by early childhood trauma, and a mother interviewing her sixteen-year-old son in order to show that others who are depressed and have OCD are not alone. Cindy L. Rodriguez writes about cultural issues regarding the Latinx community and the treatment of mental illness. Importantly, this book emphasizes that many people live with mental health issues and that, despite the ignorance about and negativity toward mental illness, there is nothing of which they should be ashamed. Writers of these essays offer support by demonstrating that they are survivors who are willing to acknowledge and discuss their different illnesses. These are important messages to make available to teens. -- VOYA * April 1, 2018 * In this collection of personal essays, thirty-one authors of children's and young adult literature (including well-known names such as Hannah Moskowitz, Francisco X. Stork, and Francesca Lia Block) reveal their struggles with anxiety, depression, compulsions to self-harm, suicidal ideations, and other mental conditions and disorders. A few discuss their experiences with close others who are suffering, but most describe in detail what their own good and bad days are like. Some use evocative metaphors and images, while others are quite literal, and nearly all describe the therapies and strategies that they have found effective while highlighting that there are no easy, permanent, or one-size-fits-all solutions. Most of the essays are explicitly directive in encouraging readers to seek help, and comforting in the authors'

Bloggat om Life Inside My Mind