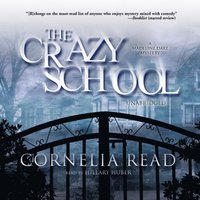 av Cornelia Read
Ljudbok (MP3), Engelska, 2008-01-01
219
Ladda ned
Spara som favorit
Laddas ned direkt
Lyssna i vår app för iPhone, iPad och Android
Madeline Dare has traded in the drudgery of living in backwoods Syracuse, New York, to work as a teacher at Santangelo Academy, a boarding school for emotionally disturbed teenagers in the Berkshires. Behind the ornate gates of the academy, she finds a disturbing realm where students and teachers must follow the dean's bizarre therapies. From her first day, Madeline doubts Dr. Santangelo's credibility, and she's not afraid to voice her concerns. But she quickly discovers that many of her colleagues are devout followers of the dean. When a chilling event confirms Madeline's suspicions, she feels trapped within a school full of lunatics. Shut off from the outside world, Maddie forms an unlikely alliance with a small group of rebellious students whose constant resistance to authority may be her only salvation.
Visa hela texten