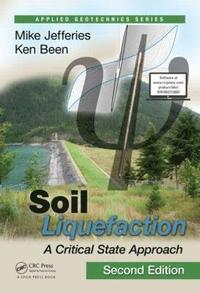 av Mike Jefferies, Ken Been
Inbunden Engelska, 2015-09-21
2089
Köp
Spara som favorit
Skickas inom 10-15 vardagar.
Fri frakt inom Sverige för privatpersoner.
Finns även som
Visa alla 1 format & utgåvor
A Rigorous and Definitive Guide to Soil Liquefaction Soil liquefaction occurs when soil loses much of its strength or stiffness for a time-usually a few minutes or less-and which may then cause structural failure, financial loss, and even death. It can occur during earthquakes, from static loading, or even from traffic-induced vibration. It occurs worldwide and affects soils ranging from gravels to silts. From Basic Physical Principles to Engineering Practice Soil Liquefaction has become widely cited. It is built on the principle that liquefaction can, and must, be understood from mechanics. This second edition is developed from this premise in three respects: with the inclusion of silts and sandy silts commonly encountered as mine tailings, by an extensive treatment of cyclic mobility and the cyclic simple shear test, and through coverage from the "element" scale seen in laboratory testing to the evaluation of "boundary value problems" of civil and mining engineering. As a mechanics-based approach is necessarily numerical, detailed derivations are provided for downloadable open-code software (in both Excel/VBA and C++) including code verifications and validations. The "how-to-use" aspects have been expanded as a result of many conversations with other engineers, and these now cover the derivation of soil properties from laboratory testing through to assessing the in situ state by processing the results of cone penetration testing. Downloadable software is supplied on www.crcpress.com/product/isbn/9781482213683 Includes derivations in detail so that the origin of the equations is apparent Provides samples of source code so that the reader can see how complex-looking differentials actually have pretty simple form Offers a computable constitutive model in accordance with established plasticity theory Contains case histories of liquefaction Makes available downloads and source data on the CRC Press website Soil Liquefaction: A Critical State Approach, Second Edition continues to cater to a wide range of readers, from graduate students through to engineering practice.
Visa hela texten

Mike Jefferies is a registered professional engineer (AB, BC: Canada). Graduating in civil engineering from King's College in London, his interest in theoretical soil mechanics led to a MSc from Imperial College. Shortly thereafter Mike immigrated to Canada, joining Golder Associates in 1978 and with whom he has worked worldwide. In 2009 independence beckoned and Mike now splits his work between pursuing advances in geomechanics and the more usual diet of a review consultant across a range of dam, mining, and offshore projects. Ken Been obtained his engineering education at the University of Cape Town in South Africa before going on to do his D.Phil in soil mechanics at the University of Oxford as a Rhodes Scholar. Since 1981 he has worked for Golder Associates in Canada, the U.K., Germany, and the USA, providing geotechnical engineering consulting to the oil and gas, mining, and civil infrastructure industry worldwide from the equator to the Arctic. He is a chartered engineer in the UK and a registered professional engineer in several Canadian provinces.