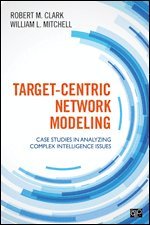 av Robert M Clark
Häftad Engelska, 2015-06-04
478
Köp
Spara som favorit
Skickas inom 7-10 vardagar.
Gratis frakt inom Sverige över 159 kr för privatpersoner.
Finns även som
Visa alla 1 format & utgåvor
Students will learn how to perform the specific actions of problem definition and breakdown, target network modelling, and collaborative sharing in the service of creating a high-quality, actionable intelligence product. This book provides hands-on skill-building and application?moving from the ?what? and the ?why? to the ?how?. The first part of the book will introduce the analytic methodology, stressing the basics of model building. The second part of the book comprises case studies with exercises that span issues/topics covering terrorism, law enforcement, military operations, cyber-security, transnational crime, and homeland security. The authors will also provide an instructor?s guide with possible solutions for the exercises (as no case has just one ?right? answer).
Visa hela texten

“Target-Centric Network Modeling serves as an ideal companion for Intelligence Analysis: A Target-Centric Approach.  Drawing on years of experience in the intelligence professions and the academic community, the authors convey complicated concepts clearly, enabling readers to make analytical connections. Target-Centric Networking Model provides an excellent review of terms and information pertinent to the analytic process, and its case studies are relevant, rich in detail, and appropriate for academic and practitioner use.”

“Practice in using various intelligence analysis techniques is vital to student learning Target-Centric Network Modeling, in conjunction with Clark’s Intelligence Analysis, provides students the practice needed to master a number of advanced analytic procedures.  This book’s target-centric network modeling approach is a significant contribution to the field of intelligence analysis.”

Robert M. Clark has more than five decades of U.S. intelligence community experience. A USAF lieutenant colonel (retired), Dr. Clark served as an electronics warfare officer and intelligence officer. At the CIA, he was a senior analyst and group chief responsible for developing analytic methodologies. He was cofounder and CEO of the Scientific and Technical Analysis Corporation, a privately held company serving the U.S. intelligence community. Clark holds an SB from MIT, a PhD in electrical engineering from the University of Illinois, and a JD from George Washington University. Beyond analyzing wicked intelligence issues, his passion is writing on the topic of intelligence. His books include Intelligence Analysis: A Target-Centric Approach (5th edition, 2016), The Technical Collection of Intelligence (2010), and Intelligence Collection (2014). He is coauthor, with Dr. William Mitchell, of Target-Centric Network Modeling (2015) and Deception: Counterdeception and Counterintelligence (2019); and coeditor, with Dr. Mark Lowenthal, of Intelligence Collection: The Five Disciplines (2015). Dr. Clark also develops and teaches courses for audiences in academia, national intelligence, and the military. He currently serves as an adjunct professor at the Johns Hopkins University teaching graduate courses.

William L. Mitchells military and intelligence career spans three decades including operations in Afghanistan, the Balkans, Iraq, Africa, and French Guyana. Dr. Mitchell is currently an active member of Danish Defence and an all-source specialist, researcher, instructor, and lecturer. At the Royal Danish Defence College (RDDC) he is responsible for the synchronization of theory, practice, and education regarding intelligence and joint operations. He is a member of the RDDC Research Board and supports NATO and US Department of Defense research, education, and doctrine development programs. He has several publications on intelligence and battlespace agility, and was part of the NATO Science & Technology Organization group awarded the 2014 NATO Scientific Achievement Award. Dr. Mitchell has a BA, an MA with Distinction from Kent University, and a PhD from Aarhus University in Political Science. He is a decorated war veteran of two countries, with one citation and several medals, including the French Croix de Combatant and the Danish Defence medal.