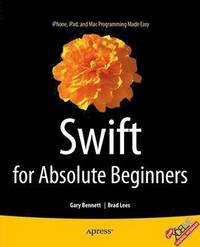 av Gary Bennett, Brad Lees
Häftad Engelska, 2014-12-24
379
Köp
Spara som favorit
Skickas inom 10-15 vardagar.
Fri frakt inom Sverige för privatpersoner.
The professional development team that brought you two editions of Objective-C for the Absolute Beginners and have taught thousands of developers around the world to write some of the most popular iPhone apps in their categories on the app store, have now leveraged their instruction for Swift. Swift for Absolute Beginners is perfect for those with no programming background, those with some programming experience but no object-oriented experience, or those that have a great idea for an app but haven't programmed since school. Gary Bennett and Brad Lees are full-time professional iOS developers and have developed a broad spectrum of apps for Fortune 500 companies. The authors have taken their combined 12 years of writing apps, teaching online iOS courses, the experience from their first two iOS books, along with their free online instruction and free online forum to create an excellent training book. Topics include: How to be successful at learning Swift Using Swift Playgrounds to learn iOS development quickly What is Object Oriented Programming What are Swift classes, properties, and functions Proper user interface and user experience design Swift data types: integers, floats, strings, booleans How to use Swift data collections: arrays and dictionaries Boolean logic, comparing data, and flow control Writing iPhone apps from scratch Avoiding Swift pitfalls Many students have a difficult time believing they can learn to write iOS apps or just staying motivated through learning the process. This book, along with the free, live online training sessions, helps students stay motivated and overcome obstacles while they learn to be great iOS developers.
Visa hela texten

Gary Bennett is president of xcelMe.com. xcelMe teaches iPhone/iPad programming courses online. Gary has taught hundreds of students how to develop iPhone/iPad apps, and has several very popular apps on the iTunes App Store. Gary's students have some of the best-selling apps on the iTunes App Store. Gary also worked for 25 years in the technology and defense industries. He served 10 years in the U.S. Navy as a nuclear engineer aboard two nuclear submarines. After leaving the Navy, Gary worked for several companies as a software developer, chief information officer, and resident. As CIO, he helped take VistaCare public in 2002. Gary also co-authored emiPhone Cool Projects/em for Apress. Gary lives in Scottsdale, Arizona with his wife, Stefanie, and their four children.