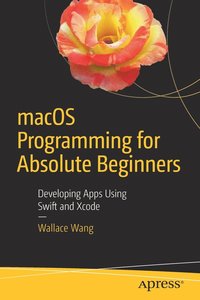 av Wallace Wang
Häftad Engelska, 2017-03-02
479
Köp
Spara som favorit
Skickas inom 5-8 vardagar.
Fri frakt inom Sverige för privatpersoner.
Learn how to code for the iMac, Mac mini, Mac Pro, and MacBook using Swift, Apple's hottest programming language. Fully updated to cover the new MacBook Touch Bar, macOS Programming for Absolute Beginners will not only teach complete programming novices how to write macOS programs, but it can also help experienced programmers moving to the Mac for the first time. You will learn the principles of programming, how to use Swift and Xcode, and how to combine your knowledge into writing macOS programs. If you've always wanted to learn coding but felt stymied by the limitation of simplistic programming languages or intimidated by professional but complicated programming languages, then you'll want to learn Swift. Swift is your gateway to both Mac and iOS app development while being powerful and easy to learn at the same time, and macOS Programming for Absolute Beginners is the perfect place to start - add it to your library today.What You'll Learn Master the basic principles of object-oriented programming Use Xcode, the main programming tool used for both macOS and iOS development See what makes Swift unique and powerful as a programming language and why you should learn it Create macOS programs using Swift and Xcode Apply interface principles that follow Apple's Human Interface Guidelines Take advantage of the new Touch Bar Who This Book Is For People who want to learn programming for the first time and for experienced programmers wanting to learn Xcode and the Mac for the first time.
Visa hela texten

Wallace Wang is a former Windows enthusiast who took one look at Vista and realized that the future of computing belonged to the Mac. He s written more than 40 computer books, including Microsoft Office for Dummies, Beginning Programming for Dummies, Steal This Computer Book, My New Mac, and My New iPad. In addition to programming the Mac and iPhone/iPad, he also performs stand-up comedy, having appeared on A&E s "Evening at the Improv," and having performed in Las Vegas at the Riviera Comedy Club at the Riviera Hotel & Casino. When he's not writing computer books or performing stand-up comedy, he also enjoys blogging about screenwriting at his site, The 15 Minute Movie Method, where he shares screenwriting tips with other aspiring screenwriters who all share the goal of breaking into Hollywood.