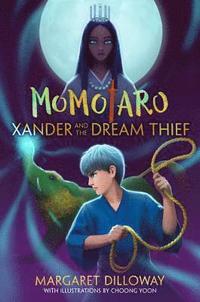 Xander and the Dream Thief

av Margaret Dilloway
Häftad Engelska, 2018-04-03
119
Köp
Spara som favorit
Xander Miyamoto should be feeling great. It's the beginning of summer vacation, his mother has returned from a long absence, and he has learned that he is a warrior with special powers. Xander never would have guessed that the old Japanese folktale about Momotaro, the hero who sprang from a peach pit, was real, much less part of his own heritage.

But instead of revelling in his recent victory against the oni, monsters bent on creating chaos, Xander is feeling resentful. What took his mother so long to come back? Why does his father insist on ruining the summer with study and training? And why is Xander plagued by nightmares every night? Maybe this whole Momotaro thing is overrated.

Xander's grandmother gives him a special baku charm to use to chase his nightmares away. He just has to be careful not to rely on it too much. If he does, the baku will not only take his dreams, but those of everyone in the house, forever. Without dreams, there is no hope, no motivation, no imagination, no Momotaro. And then it would be far too easy for Ozuno, king of the oni, to wreak havoc. . . .

On his second quest, Xander explores new surreal landscapes, encounters more strange and dangerous creatures, and faces even higher stakes as he learns whether or not he has what it takes to be Momotaro.
Visa hela texten