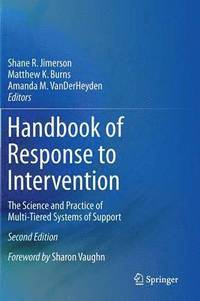 Handbook of Response to Intervention

The Science and Practice of Multi-Tiered Systems of Support

"This book on best practices for using response to intervention (RTI) within Multi-Tiered Systems of Support (MTSS) covers both assessment and intervention. ... The book is replete with figures and tables which help clarify the text. This book fully discusses the multitiered systems of support. This update is justified because of the increase in research studies since the previous edition." (Gary B. Kaniuk, Doody's Book Reviews, April, 2016)