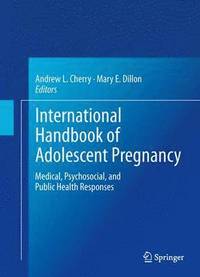 av Andrew L Cherry Jr, Mary E Dillon
Inbunden Engelska, 2014-01-13
2769
Köp
Spara som favorit
Skickas inom 3-6 vardagar.
Fri frakt inom Sverige för privatpersoner.
Finns även som
Visa alla 1 format & utgåvor
The rates are on the decline worldwide. But adolescent pregnancies still occur, placing millions of girls each year at risk for medical complications and social isolation and their babies for severe health problems-especially when prenatal care is inadequate or nonexistent. But as the opportunity for young women and girls increases around the world, adolescent pregnancy will continue to decline. Featuring reports from countries across the developed and developing worlds, the International Handbook of Adolescent Pregnancy analyzes the scope of the problem and the diversity of social and professional responses. Its biological/ecological perspective identifies factors influencing childhood pregnancy, as well as outcomes, challenges and needs of very young mothers as they differ across nations and regions. Salient comparisons are made as cultural contexts and community support vary widely and attention is paid to issues such as child marriage, LGBT concerns and the impact of religion and politics on health care, particularly access to contraception, abortion and other services. This global coverage heightens the understanding of readers involved in care, education and prevention programs and otherwise concerned with the psychosocial development, reproductive health and general well-being of girls. Included in the Handbook: Biological influences of adolescent pregnancy. Adolescent maternal health and childbearing. Adolescent pregnancy and mental health. International perspectives on adolescent fathers. Adolescent pregnancy as a feminist issue. Adolescent pregnancy as a social problem. Plus viewpoints from more than thirty countries. As a unique source of up-to-date findings and clear-headed analysis, the International Handbook of Adolescent Pregnancy is a go-to reference for practitioners and researchers in maternal and child health, pediatrics, adolescent medicine and global health.
Visa hela texten

Dr. Andrew L. Cherry, Jr., DSW, ACSW is the Medicaid Endowed Professor in Mental Health at the University of Oklahoma, School of Social Work. He has worked in the helping professions since receiving his BS degree from Troy State University, Troy, Alabama, in 1969. While working as a child welfare worker in Alabama he became interested in the growing phenomena of teenage pregnancy. He received his Masters of Social Work from the University of Alabama in 1974 and worked as a psychiatric social worker at Bryce Hospital, in Tuscaloosa, Alabama. He received his doctorate from the Columbia University School of Social Work in 1986. Over his academic career, he has published numerous professional articles and books and presented papers at numerous professional conferences where he explored international issues such as adolescent pregnancy from a mental health perspective. This is his second edited book on international adolescent pregnancy. The first book was published in 2001. Dr. Cherry and Dr. Dillon collaborated on both books.