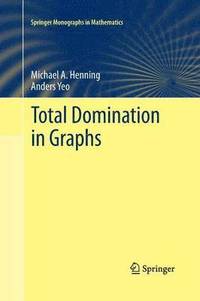 av Michael A Henning, Anders Yeo
Häftad Engelska, 2015-05-20
1059
Köp
Spara som favorit
Skickas inom 10-15 vardagar.
Fri frakt inom Sverige för privatpersoner.
Finns även som
Visa alla 2 format & utgåvor
Total Domination in Graphs gives a clear understanding of this topic to any interested reader who has a modest background in graph theory. This book provides and explores the fundamentals of total domination in graphs. Some of the topics featured include the interplay between total domination in graphs and transversals in hypergraphs, and the association with total domination in graphs and diameter-2-critical graphs. Several proofs are included in this text which enables readers to acquaint themselves with a toolbox of proof techniques and ideas with which to attack open problems in the field. This work is an excellent resource for students interested in beginning their research in this field. Additionally, established researchers will find the book valuable to have as it contains the latest developments and open problems.
Visa hela texten

From the reviews: "This book is a concise ... lucid, and thorough survey on total domination. It is intended to bring graduate students and researchers up to date on results and techniques in the field ... . It will be a valuable resource for those in the field or wishing to learn the field." (William F. Klostermeyer, Mathematical Reviews, November, 2013)