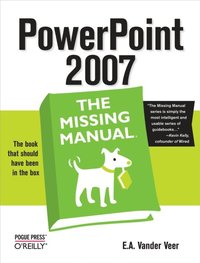 av E A Vander Veer
E-bok (EPUB - DRM), Engelska, 2006-12-22
249
Ladda ned
Spara som favorit
Laddas ned direkt
Läs i vår app för iPhone, iPad och Android
Finns även som
Visa alla 2 format & utgåvor
Like every other application in Microsoft Office suite, PowerPoint is loaded with features. So many, in fact, that even veterans don't know where to find them all. Microsoft solved this problem in PowerPoint 2007 by redesigning the user interface with a tabbed toolbar that makes features easy to locate and use. PowerPoint 2007 also boasts improved graphics, additional templates, the ability to save custom layouts, and improved collaboration through SharePoint. One thing Microsoft hasn't improved is its poor documentation. To learn the ins and outs of all the features in PowerPoint 2007, Microsoft merely offers online help. If you're familiar with previous versions of the program, you may be lost the first time you fire up the new PowerPoint; or you would be if it weren't for PowerPoint 2007: The Missing Manual.This book, written specifically for this version of the software, not only offers the basics of how to create, save, set up, run, and print a basic bullets-and-background slideshow, but takes you into the world of multimedia, animation, and interactivity. You'll learn how to add pictures, sound, video, animated effects, and controls (buttons and links) to their slides, along with ways to pull text, spreadsheets, and animations created in other programs. You can also create your own reusable design templates and learn to automate repetitive tasks with macros. Learn how to take advantage of advanced functions (such as adding custom background images) that existed in previous PowerPoint versions, but were so cleverly hidden that few people ever found them.
Visa hela texten