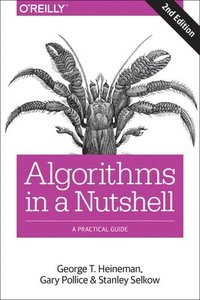 Algorithms in a Nutshell, 2e

av George Heineman, Gary Pollice, Stanley Selkow
Häftad Engelska, 2016-03-29
599
Köp
Spara som favorit
Kan levereras innan julafton!
Creating robust software requires the use of efficient algorithms, but programmers seldom think about them until a problem occurs. This updated edition of Algorithms in a Nutshell describes a large number of existing algorithms for solving a variety of problems, and helps you select and implement the right algorithm for your needs-with just enough math to let you understand and analyze algorithm performance. With its focus on application, rather than theory, this book provides efficient code solutions in several programming languages that you can easily adapt to a specific project. Each major algorithm is presented in the style of a design pattern that includes information to help you understand why and when the algorithm is appropriate. With this book, you will: Solve a particular coding problem or improve on the performance of an existing solution Quickly locate algorithms that relate to the problems you want to solve, and determine why a particular algorithm is the right one to use Get algorithmic solutions in C, C++, Java, and Ruby with implementation tips Learn the expected performance of an algorithm, and the conditions it needs to perform at its best Discover the impact that similar design decisions have on different algorithms Learn advanced data structures to improve the efficiency of algorithms
Visa hela texten

George Heineman is an Associate Professor of Computer Science at WPI. He was the Program Chair for the 2005 International Symposium on Component-Based Software Engineering. Gary Pollice is a Professor of Practice at Worcester Polytechnic Institute. He made the move in 2003 to the hallowed halls of academia where he has been corrupting the minds of the next generation of software developers with radical ideas like, "learn how to work as part of a team and it's okay to be a nerd as long as you are a great one." Gary is also a co-author of Head First Object-Oriented Analysis and Design. Stanley Selkow has been on the faculty at universities in Knoxville TN and Worcester MA, as well as Montreal, Chonqing, Lausanne and Paris for almost four decades. His major research is in graph theory and algorithm design.