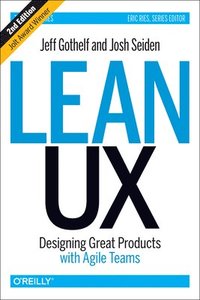 av Jeff Gothelf, Josh Seden
Inbunden Engelska, 2016-11-01
312
Bevaka
Spara som favorit
Tillfälligt slut – klicka "Bevaka" för att få ett mejl så fort boken går att köpa igen.
Lean UX has become the preferred approach to interaction design, tailor-made for today's agile teams. In the second edition of this award winning book, leading advocates Jeff Gothelf and Josh Seiden expand on the valuable Lean UX principles, tactics, and techniques covered in the first edition to share how product teams can easily incorporate design, experimentation, iteration, and continuous learning from real users into their Agile process. Inspired by Lean and Agile development theories, Lean UX lets you focus on the actual experience being designed, rather than deliverables. This book shows you how to collaborate closely with other members of your Agile product team, and gather feedback early and often. You'll learn how to drive the design in short, iterative cycles to assess what works best for the business and the user. Lean UX shows you how to make this change-for the better. Frame a vision of the problem you're solving and focus your team on the right outcomes Bring the designers' toolkit to the rest of your product team Share your insights with your team much earlier in the process Create Minimum Viable Products to determine which ideas are valid Incorporate the voice of the customer throughout the project cycle Make your team more productive: combine Lean UX with Agile's Scrum framework Understand the organizational shifts necessary to integrate Lean UX
Visa hela texten

Jeff Gothelf is a designer & Agile practitioner. He is a leading voice on the topics of Agile UX & Lean UX and a highly sought-after international speaker. He is Principal in Neo's New York City office. Previously, Jeff has led teams at TheLadders, Publicis Modem, WebTrends, Fidelity, & AOL. Josh Seiden has been creating great technology products for more than 20 years. A UX design leader, Josh has worked in hardware and software, consumer and enterprise, mobile, web, and desktop. He is Principal at Neo and, prior to that role, he was head of product design at Wall Street innovator Liquidnet, and lead pioneering interaction design teams at Cooper. He is a founder and past president of the Interaction Design Association.