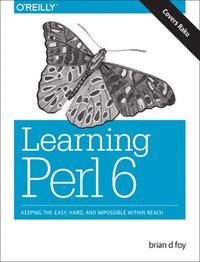 Keeping the Easy, Hard, and Impossible Within Reach

av Brian D Foy
Häftad Engelska, 2018-09-11
439
Köp
Spara som favorit
Finns även som
Visa alla 2 format & utgåvor
If you're ready to get started with Raku (formerly Perl 6), this is the book you want, whether you're a programmer, system administrator, or web hacker. Raku is a new language-a modern reinvention of Perl suitable for almost any task, from short fixes to complete web applications. This hands-on tutorial gets you started. Author brian d foy (Mastering Perl) provides a sophisticated introduction to this new programming language. Each chapter in this guide contains exercises to help you practice what you learn as you learn it. Other books may teach you to program in Raku, but this book will turn you into a Raku programmer. Learn how to work with: Numbers, strings, blocks, and positionals Files and directories and input/output Associatives, subroutines, classes, and roles Junctions and sets Regular expressions and built-in grammars Concurrency features: Promises, supplies, and channels Controlling external programs and other advanced features
Visa hela texten

brian d foy is a prolific Perl trainer and writer, and runs The Perl Review to help people use and understand Perl through educational, consulting, code review, and more. He's a frequent speaker at Perl conferences. He's the co-author of Learning Perl, Intermediate Perl, and Effective Perl Programming, and the author of Mastering Perl. He was been an instructor and author for Stonehenge Consulting Services from 1998 to 2009, a Perl user since he was a physics graduate student, and a die-hard Mac user since he first owned a computer. He founded the first Perl user group, the New York Perl Mongers, as well as the Perl advocacy nonprofit Perl Mongers, Inc., which helped form more than 200 Perl user groups across the globe. He maintains the perlfaq portions of the core Perl documentation, several modules on CPAN, and some stand-alone scripts.