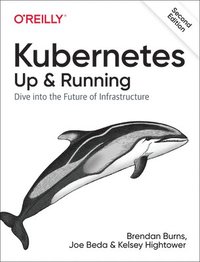 Kubernetes: Up and Running

Dive Into the Future of Infrastructure

av Brendan Burns, Joe Beda, Kelsey Hightower
Häftad Engelska, 2019-10-18
609
Köp
Spara som favorit
Finns även som
Visa alla 3 format & utgåvor
Kubernetes radically changes the way applications are built and deployed in the cloud. Since its introduction in 2014, this container orchestrator has become one of the largest and most popular open source projects in the world. The updated edition of this practical book shows developers and ops personnel how Kubernetes and container technology can help you achieve new levels of velocity, agility, reliability, and efficiency. Kelsey Hightower, Brendan Burns, and Joe Beda-who've worked on Kubernetes at Google and beyond-explain how this system fits into the lifecycle of a distributed application. You'll learn how to use tools and APIs to automate scalable distributed systems, whether it's for online services, machine learning applications, or a cluster of Raspberry Pi computers. Create a simple cluster to learn how Kubernetes works Dive into the details of deploying an application using Kubernetes Learn specialized objects in Kubernetes, such as DaemonSets, jobs, ConfigMaps, and secrets Explore deployments that tie together the lifecycle of a complete application Get practical examples of how to develop and deploy real-world applications in Kubernetes
Visa hela texten

Brendan Burns (PhD, University of Massachusetts Amherst) teaches game development in the department of Computer Science at Union College in Schenectady, New York. At Union, he also researches the role that games can play in general Computer Science education. In addition to his academic work, Brendan is a maintainer of the port of Id Software's bestselling game, "Quake II" to Linux and the author of several games for the Palm platform. He is the author of 3 O'Reilly books now in print. Joe is the lead engineer for the Google Compute Engine project. He has been at Google for 8 years and, besides GCE, Joe has worked on Google Talk, Goog-411 and Adwords keyword suggestions. Before Google, Joe was an engineer at Microsoft working on IE and WPF. Kelsey Hightower has worn every hat possible throughout his career in tech, and enjoys leadership roles focused on making things happen and shipping software. Kelsey is a strong open source advocate focused on building simple tools that make people smile. When he is not slinging Go code, you can catch him giving technical workshops covering everything from programming to system administration.