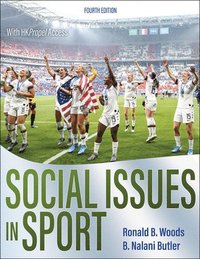 Ronald B. Woods, PhD, is an adjunct professor of health science and human performance at the University of Tampa. He was a professor of physical education and men's tennis coach at West Chester University in Pennsylvania for 17 years and was inducted into their Athletic Hall of Fame. Woods also spent 20 years with the United States Tennis Association (USTA) and was the first director of player development charged with developing top junior players into successful playing professionals. He was honored by the International Tennis Hall of Fame with their Educational Merit Award in 1996. In 2010, Woods was inducted into the USTA Middle States Tennis Hall of Fame. Woods has been a member of the United States Professional Tennis Association (USPTA) for over 40 years. He has served as the president of the USPTA Middle States division and as a member of the national executive committee. He was honored by the USPTA as National Coach of the Year in 1982 and named a Master Tennis Professional in 1984. In 2012, Woods was inducted into the USPTA Middle States Hall of Fame. A lifelong member of SHAPE America, Woods was a member of the U.S. Olympic Coaching Committee for eight years and the Coaches' Commission of the International Tennis Federation. B. Nalani Butler, PhD, is an assistant professor of sport management at Kennesaw State University. Butler is a former college student-athlete who continued her scholarly journey until she completed her PhD at the University of Tennessee at Knoxville. During her tenure in Knoxville, she volunteered her time as a graduate student representative for the Center for Sport, Peace, and Society, which works closely with the U.S. State Department on issues involving sport diplomacy. More recently, Butler's international experience involves being a part of the International Olympic Academy's International Session for Educators, where she works with scholars around the world to develop communication and understanding with using sport as a vehicle for peace and understanding. Butler's past experiences in the sport industry include working with the Cincinnati Reds (MLB) team, USA Bobsled and Skeleton, the Georgia State University Athletic Department, and the Southern Intercollegiate Athletic Conference (SIAC). She is an editorial board member of Engaging Sports and on the Board of Commissioners for the Commission on Sport Management Accreditation (COSMA). Butler's experiences working, traveling, and playing sports have helped her to shape a scholarly professional trajectory, focused on exploring social issues in sport, locally and globally.