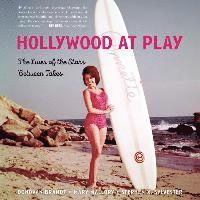 The Lives of the Stars Between Takes

av Stephen X Sylvester, Mary Nan S Mallory, Donovan Brandt
Inbunden Engelska, 2017-02-01
189
Köp
Spara som favorit
Skickas inom 7-10 vardagar.
Fri frakt inom Sverige för privatpersoner.
Finns även som
Visa alla 1 format & utgåvor
Fans from around the world continue to be fascinated by classic-era Hollywood (1925-1960) and its larger-than-life stars. Nostalgia for this simpler, more glamorous time offers a safe and temporary escape from our complex lives. The authors capture this era with in Hollywood at Play, featuring unique and rarely seen images of such legendary stars as Audrey Hepburn, Elizabeth Taylor, Bette Davis, Joan Crawford, Marilyn Monroe, Clark Gable, Judy Garland, W.C. Fields, and Tyrone Power enjoying fun and relaxation outside of their studios. Hollywood at Play presents iconic images of the classic stars taking time out from the demands of celebrity to enjoy dancing, bike-riding, roller skating, bowling, and playing tennis; diversions offering a chance to relax and be themselves. This delightful and unique book will appeal to classic movie fans, and enthusiasts of celebrity, fashion, and Hollywood history. The photos contained in Hollywood at Play come from the collection of Eddie Brandt's Saturday Matinee, Hollywood's first and oldest family-owned photo archive. From the 800,000 images available in their collection the authors have chosen over 200 fascinating and rare photos to include in this book. Among the photos are eight rare photos of a young Marilyn Monroe at play; Mickey Rooney and Judy Garland frolicking at a pool party; Steve McQueen and James Garner astride McQueen's iconic motorcycle between takes of The Great Escape;Bobby Darin and Sandra Dee out on the town; Sammy Davis Jr. hamming it up with Dean Martin and Frank Sinatra; and many others.
Visa hela texten

Stephen X. Sylvester a filmmaker and co-author M-G-M: Hollywood's Greatest Backlot and 20th Century Fox: A Century of Entertainment (August 1, 2016) and the former Executive Director of the Wattles Mansion and Gardens, Hollywood's last remaining original intact estate. In addition, he has lectured on the Hollywood studio system for the Los Angeles Club, the Art Directors Guild of America, and the American Cinematheque at the Egyptian Theatre in Hollywood. Mary Mallory is a respected researcher, author, and film historian. She is the author of Hollywood Celebrates the Holidays (Schiffer, 2015), Hollywoodland (Arcadia, 2011), and Hollywoodland: Tales Lost and Found (Kindle, 2013), and contributes to many publications including Discover Hollywood, The Silent Treatment, and the Los Angeles Philharmonic Hollywood Bowl programs. Her weekly posts for the Los Angeles themed history blog The Daily Mirror attract a wide readership, and are re-posted by blogs such as Curbed LA, LA Observed, and The Daily Deception, as well as by KFWB and the San Francisco Silent Film Festival. Mary has appeared on TCM and in Hollywood-themed documentaries. She served on the Board of Directors for Hollywood Heritage, Inc., and acts as a docent for the Hollywood Heritage Museum that it supports. Donovan Brandt is the owner and operator of Eddie Brandt's Saturday Matinee, Hollywood's oldest and largest family-owned photo archive. He has contributed to numerous Hollywood themed books and documentaries and has appeared on American Movie Classic and Turner Classic Movies.