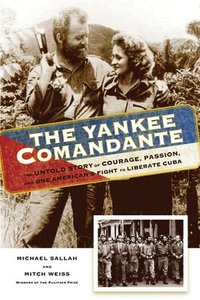 The Untold Story of Courage, Passion, and One American's Fight to Liberate Cuba

av Michael Sallah, Mitch Weiss
Häftad Engelska, 2021-03-01
169
Bevaka
Spara som favorit
Ännu ej utkommen – klicka "Bevaka" för att få ett mejl så fort boken boken går att köpa.
Finns även som
Visa alla 1 format & utgåvor
William Morgan, a tough-talking ex-paratrooper, stunned family and friends when in 1957 he left Ohio to join freedom fighters in the mountains of Cuba. He led one band of guerrillas, and Che Guevara another, and together they swept through the country, ultimately forcing corrupt dictator Fulgencio Batista from power. In just a year of fighting, the American revolutionary had altered the landscape of the Cold War. But Morgan believed they were fighting to liberate Cuba. Then Fidel Castro canceled elections, seized properties, and imprisoned Morgan's fellow freedom fighters. Even Morgan's own house mysteriously blew up. But The Comandante is about more than just the revolution. It's the story of two people in love, pressured by government agents and mobsters vying to control a nation that soon brought the world to the brink of nuclear destruction. In the mountains, Morgan met Olga Rodriguez, a beautiful, fiery nurse, whom he soon married. Together, amid their firestorm romance, they decided to take a stand and take back the government from Castro and Guevara. The newlyweds began running arms to prepare for a counterrevolution, soon caught in a cloak-and-dagger web among Castro's forces; the Mob, which controlled Havana; and the CIA's preparations for the Bay of Pigs Invasion. But one of Morgan's guards betrayed him to Castro, who threw the counterrevolutionary in prison, placing his wife and their two daughters under house arrest. The couple smuggled secret messages to each other until Olga ultimately escaped by drugging her captors. Before she could free her husband, though, a junta tribunal tried and sentenced him to death by firing squad. Drawing on declassified FBI, CIA, and Army intelligence records as well as Olga's diaries, Pulitzer Prize-winning authors Michael Sallah and Mitch Weiss skillfully reveal the inner workings of the Cuban Revolution while detailing the incredible love story of a rebel nurse and an American street hero who left their mark on history.
Visa hela texten

Praise for Tiger Force: "Tiger Force adds a graphic, frightening dimension to our knowledge of ourselves. It is bound to be read far into the future." -Washington Post Book World "Sallah and Weiss have done the American public a service by piecing together this story. ... This is one shining example of how journalism can fulfill its most noble aims: informing and consquently empowering the public." -San Francisco Chronicle "Riveting." -Dever Post "A troubling yet gripping expose ... The authors recount the disturbing details in a direct, journalistic style that makes it difficult to put the book down." -Columbus Dispatch "An engrossing story that will fill the reader with both horror and shame." -Wisconsin State Journal "Sobering and relevant ... The authors vividly convey the demanding environment in which the soldiers had to survive. ... Timely reading." -American Heritage "A compelling, chilling story ... a primer on journalistic technique, the narrative drawn from firsthand accounts ... The result is one of the most important books on the Vietnam War." -Bookmarks magazine "A vital and damning glimpse at what really goes on behind the wartime headlines." -Metro "An outstanding book ... In the best tradition of investigative journalism, the authors let the story speak for itself." -Publishers Weekly starred review "Searing ... Difficult to put down ... Highly recommended." -Library Journal A work of classic journalism, a compelling narrative that is a combination of interviews, documents, and news accounts form the time. . . .The stakes are many and real, the characters are compelling, and the shifting allegiances make for effective suspense. This is a good story told well, making The Yankee Comandante a worthy read. * Foreword Reviews * ***starred review***A nonfiction account of an unlikely American hero in revolutionary Cuba that succeeds as both a thriller and a love story. While working at the Toledo Blade, Miami Herald reporter Sallah and AP reporter Weiss. . . .met a remarkable woman living in Toledo, a Cuban emigre and former political prisoner whose story inspired another newspaper series and this book. When she was Olga Maria Rodriguez, she had fallen in love with and married a man who initially didn't even speak her language, an American named William Morgan who had found purpose in his difficult, directionless life by joining the revolutionary forces in Cuba to overthrow Fulgencio Batista. His experience in the U.S. Army had ended with him going AWOL, but his superior military skills helped him overcome the distrust of his Cuban comrades and earn the admiration of the country's citizenry, who were "hailing him as a hero of a revolution that was about the change the course of history." Yet there was tension in the revolutionary forces between Morgan's Second Front and Fidel Castro's 26th of July Movement, as the former remained committed to liberating the country and holding elections while the latter was consolidating power and turning the new government into a communist dictatorship. Even greater complications ensued as Morgan was recruited for a plot to assassinate Castro, turned double agent by revealing the plot to the targeted dictator while continuing to play along, and ultimately found himself stripped of his American citizenship and imprisoned by the Cuban government. His widow's memories help humanize a complicated and conflicted man whose story sheds fresh light on the pivotal period in U.S.-Cuban relations. Beyond the political implications and entanglements, the story engrosses with its fast-paced, plainspoken narrative. * Kirkus *