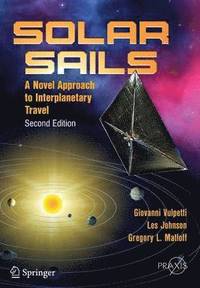 A Novel Approach to Interplanetary Travel

av Giovanni Vulpetti, Les Johnson, Gregory L Matloff
Häftad Engelska, 2014-11-05
439
Köp
Spara som favorit
Skickas inom 3-6 vardagar.
Fri frakt inom Sverige för privatpersoner.
Finns även som
Visa alla 3 format & utgåvor
The reality of sunlight-based sailing in space began in May 2010, and solar sail technology and science have continued to evolve rapidly through new space missions. Using the power of the Sun's light for regular travel propulsion will be the next major leap forward in our journey to other worlds. This book is the second edition of the fascinating explanation of solar sails, how they work and how they will be used in the exploration of space. Updated with 35% new material, this second edition includes three new chapters on missions operated by Japan and the US, as well as projects that are in progress. The remainder of the book describes the heritage of exploration in water-borne sailing ships and the evolution to space-vehicle propulsion; as well as nuclear, solar-electric, nuclear-electric and antimatter rocket devices. It also discusses various sail systems that may use either sunlight or solar wind, and the design, fabrication and steering challenges associated with solar sails. The first edition was met with overwhelmingly positive reviews, and deemed "a title that needs to be on your shelf if you're seriously interested in the next step as we move beyond rocketry" (Centauri Dreams, September 2008). Written with a mixed approach, this book appeals to both the general public as well as those with a more scientifically technical background.
Visa hela texten

Giovanni Vulpetti received his Ph.D. in plasma physics in 1973. Subsequently, he specialized in astrodynamics. He wrote many tens of scientific papers about astrodynamics, advanced propulsion concepts, and interstellar flight, with particular regard to matter-antimatter annihilation propulsion. In 1979, he joined Telespazio SpA (Rome, Italy). From 1995 to 2011, he has attended the committee for Lunar Base & Mars exploration of the International Academy of Astronautics (IAA). He has been involving in solar-photon sailing since 1992. In the 1990s, he found out new types of sailcraft trajectories and published his theory mainly on Acta Astronautica, JPL workshops, and IAA symposia. In 1994, he was elected a Full Member of IAA. In spring 1997, he was a consultant at ESA/ESTEC about the solar-sail mission concept Daedalus. In 1979-2004, he contributed to 11 Italian and European space programs. In 2001, he was a consultant at NASA/MSFC for the NASA Interstellar Probe. In the course of two decades, he accomplished some large computer codes devoted to mission analysis & trajectory optimization via rockets and/or solar-sails. In the 90s, he was a member of the IAA committee for small satellites and, consequently, he participated in the design of Telespazio TemiSat (launched in August 1993). During 2006-2007, he joined Galilean Plus (Rome, Italy) as chief scientist, and participated in the program of the Italian Space Agency for lunar explorations. To date, he has published about 120 research papers and reports. He was a COSPAR-Associate in 2002-2007. In 2009 and 2014, he served as managing guest editor of Acta Astronautica special issues. He wrote the book Fast Solar Sailing, Astrodynamics of Special Sailcraft Trajectories, Space Technology Library 30, Springer 2012. Since spring 2013, he has been a guest lecturer on the physics of in-space propulsion at the Dept. of Astronautical Engineering of University of Rome 'La Sapienza'. Les Johnson is a physicist at NASA's Marshall Space Flight Center in Huntsville, Alabama, where he serves as the Senior Technical Advisor for the Advanced Concepts Office. He was a Co-Investigator on the Japanese T-Rex space tether experiment, the Principal Investigator of the NASA ProSEDS mission, and the first manager of NASA's In-Space Propulsion Technology Project. He holds three patents and was thrice awarded NASA's Exceptional Achievement Medal. He is a TEDx speaker, was the featured "interstellar explorer" in National Geographic's January 2013 issue, and a member of the Advisory Board for The Journal of the British Interplanetary Society. Les and his wife, Carol, have two children and live in Madison, Alabama (a satellite community of Huntsville - the original "Rocket City, USA!"). Greg Matloff is a leading expert in possibilities for interstellar propulsion , especially near-Sun solar-sail trajectories that might ultimately enable interstellar travel, and is an astronomy professor with the physics department of New York City College of Technology, CUNY, a consultant with NASA Marshall Space Flight Center, a Hayden Associate of the American Museum of Natural History and a Member of the International Academy of Astronautics. He co-authored with Les Johnson of NASA and C Bangs Paradise Regained (2009), Living Off the Land in Space (2007) and has authored Deep-Space Probes (edition 1: 2000 and edition 2: 2005). As well as authoring More Telescope Power (2002), Telescope Power (1993), The Urban Astronomer (1991), he co-authored with Eugene Mallove The Starflight Handbook. (1989). His papers on interstellar travel, the search for extraterrestrial artifacts, and methods of protecting Earth from asteroid impacts have been published in JBIS, Acta Astronautica, Spaceflight, ,Space Technology, Journal of Astronautical Sciences, and Mercury. His popular articles have appeared in many publications, including Analog and IEEE Spectrum. In 1998, he won a $5000 prize in the inter

Acknowledgements.- Preface.- Foreword. Part I: Space Engines: Past and Present.- A Historical Introduction to Space Propulsion.- The Rocket: How It Works in Space.- Rocket Problems and Limitations- Non-Rocket-In-Space Propulsion.- The Solar-Sail Reality: from the Oceans to Space.- Part II Space Mission by Sail.- Principles of Space Sailing.- What is a Space Sailcraft?- Sails vs. Rockets.- Exploring and Developing Space by Sailcraft.- Riding a Beam of Light.- Part III Construction of Sailcraft.- Designing a Solar Sail.- Building a Sailcraft.- Progress to Date.- Future Plans.- Part IV Breakthroughs in Space.- The IKAROS/JAXA Mission.- The NanoSail-D2/NASA Mission.- New Projects in Progress.- Part V Space Sailing: Some Technical Aspects.- Space Sources of Light.- Modeling Thrust via Electromagnetic Radiation Pressure and Diffraction- Sailcraft Trajectories.- Sails in Space Environment.