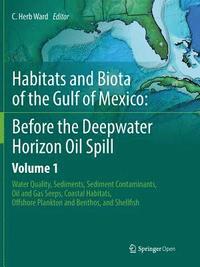 Habitats and Biota of the Gulf of Mexico: Before the Deepwater Horizon Oil Spill

av C Herb Ward
Häftad Engelska, 2018-08-02
659
Köp
Spara som favorit
Finns även som
Visa alla 2 format & utgåvor
This book is open access under a CC BY-NC 2.5 license. The Gulf of Mexico is an open and dynamic marine ecosystem rich in natural resources but heavily impacted by human activities, including agricultural, industrial, commercial and coastal development. The Gulf of Mexico has been continuously exposed to petroleum hydrocarbons for millions of years from natural oil and gas seeps on the sea floor, and more recently from oil drilling and production activities located in the water near and far from shore. Major accidental oil spills in the Gulf are infrequent; two of the most significant include the Ixtoc I blowout in the Bay of Campeche in 1979 and the Deepwater Horizon Oil Spill in 2010. Unfortunately, baseline assessments of the status of habitats and biota in the Gulf of Mexico before these spills either were not available, or the data had not been systematically compiled in a way that would help scientists assess the potential short-term and long-term effects of such events. This 2-volume series compiles and summarizes thousands of data sets showing the status of habitats and biota in the Gulf of Mexico before the Deepwater Horizon Oil Spill. Volume 1 covers: water and sediment quality and contaminants in the Gulf; natural oil and gas seeps in the Gulf of Mexico; coastal habitats, including flora and fauna and coastal geology; offshore benthos and plankton, with an analysis of current knowledge on energy capture and energy flows in the Gulf; and shellfish and finfish resources that provide the basis for commercial and recreational fisheries.
Visa hela texten

C. Herb Ward is Professor Emeritus at Rice University. He held the A. J. Foyt Family Chair of Engineering and was Professor of Civil and Environmental Engineering in the George R. Brown School of Engineering and Professor of Ecology and Evolutionary Biology in the Weiss School of Natural Sciences. He is now a Scholar in Environmental Science and Technology Policy in the James A. Baker III Institute for Public Policy at Rice University. He received his BS (1955) in Biology and Agricultural Science from New Mexico College of Agriculture and Mechanical Arts, his MS (1958) and PhD (1960) in Microbial Diseases, Physiology, and Genetics of Plants from Cornell University, and the MPH (1978) in Environmental Health from the University of Texas School of Public Health. He is a registered professional engineer in Texas and a Board-Certified Environmental Engineer by the American Academy of Environmental Engineers. He was the founding Chair of the Department of Environmental Science and Engineering, Chair of the Department of Civil and Environmental Engineering, and the inaugural Director of the Energy and Environmental Systems Institute at Rice University. He also served as Director of the U.S. Environmental Protection Agency (USEPA)-sponsored National Center for Ground Water Research and the U.S. Department of Defense (DoD)-sponsored Advanced Applied (Environmental) Technology Development Facility. Dr. Ward was a member of the USEPA Science Advisory Board and served as Chair of the Scientific Advisory Board of the DoD Strategic Environmental Research and Development Program (SERDP). He is the founding Editor-in-Chief of the scientific journal Environmental Toxicology and Chemistry and led the development of the journal of Industrial Microbiology and Biotechnology. He is a Fellow in the American Academy of Microbiology (AAM), Society of Industrial Microbiology and Biotechnology (SIMB), and the Society of Environmental Toxicology and Chemistry. Dr. Ward received the Pohland Medal for Outstanding Contributions to Bridging Environmental Research, Education, and Practice and the Brown and Caldwell Lifetime Achievement Award for Environmental Remediation in 2006, the Water Environment Federation McKee Medal for Achievement in Groundwater Restoration in 2007, the SIMB Charles Thom Award for bioremediation research in 2011, and was recognized as a Distinguished Alumnus by New Mexico State University in 2013. He was a co-author of the 2011 AAM report, Microbes and Oil Spills.