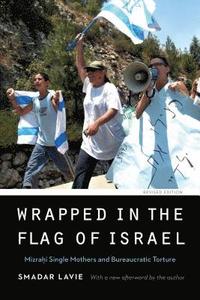 Wrapped in the Flag of Israel

av Smadar Lavie
Häftad Engelska, 2018-07-01
269
Köp
Spara som favorit
Skickas inom 5-8 vardagar.
Gratis frakt inom Sverige över 159 kr för privatpersoner.
Finns även som
Visa alla 2 format & utgåvor
In Wrapped in the Flag of Israel, Smadar Lavie analyzes the racial and gender justice protest movements in the State of Israel from the 2003 Single Mothers' March to the 2014 New Black Panthers and explores the relationships between these movements, violence in Gaza, and the possibility of an Israeli attack on Iran. Lavie equates bureaucratic entanglements with pain-and, arguably, torture-in examining a state that engenders love and loyalty among its non-European Jewish women citizens while simultaneously inflicting pain on them. Weaving together memoir, auto-ethnography, political analysis, and cultural critique, Wrapped in the Flag of Israel presents a model of bureaucracy as divine cosmology that is both lyrical and provocative. Lavie's focus on the often-minimized Mizrahi population juxtaposed with the state's monolithic culture suggests that Israeli bureaucracy is based on a theological notion that inserts the categories of religion, gender, and race into the foundation of citizenship. In this revised and updated edition Lavie connects intra-Jewish racial and gendered dynamics to the 2014 Gaza War, providing an extensive afterword that focuses on the developments in Mizrahi feminist politics and culture between 2014 and 2016 and its relation to Palestinians.
Visa hela texten

"Smadar Lavie offers a bracing alternative to the 'Jewish Disneyland' image of Israel in her book Wrapped in the Flag of Israel. The book documents the lived experience of women in Israeli society-from the feminist-of-color movement to the politics of funding NGOs to the role of the bureaucracy of the state. Using a combination of deep anthropological research and the personal narratives of Mizrahi single mothers, Lavie effectively challenges preconceptions about Jewish Israeli society, and in so doing, exposes the lopsided structures of power and privilege between Ashkenazi and Mizrahi Jews in Israel. Understanding Israel's intra-Jewish racism and its impact on families is crucial to any just solution for the people of Israel/Palestine."-Rebecca Vilkomerson, executive director of Jewish Voice for Peace -- Rebecca Vilkomerson "[Lavie's] compelling account defies conventional labels for ethnography by combining elements of auto-ethnography, memoir, testimonial, cultural critique, extended case study, Bakhtinian contrapunct, and the reflexive essay style of critical race feminists. . . . [A] courageous intervention of substantive, theoretical, and methodological significance."-Faye V. Harrison, professor of African American studies and anthropology at the University of Illinois at Urbana-Champaign and president of the International Union of Anthropological and Ethnological Sciences -- Faye V. Harrison "[Lavie's] unflinching exposure of intra-Jewish racism and its political consequences is unmatched."-Sally Bland, The Jordan Times -- Sally Bland * The Jordan Times * "Lavie makes an important contribution in challenging traditional methods of ethnographic research and emphasizing the necessity of subaltern auto-ethnography, particularly in the study of marginalized groups. . . . While we should not disregard studies that emphasize the positive potential of mobilization, Lavie makes an important step in explaining a case where such mobilization was not only unsuccessful but never had the possibility of creating change. Scholars of social movements should follow her lead."-Leonie Fleischmann, Peace and Change -- Leonie Fleischmann * Peace and Change * "Far from traditional anthropology, Lavie's work is a contribution to the legacy of women of color feminist works of auto-ethnography and documentations of affect in poetic and scholarly prose. . . . Readers will encounter worlds of knowledge placed in proximity, affinity, and opposition, resulting in a dynamic narrative and an informative, academic text. . . . A masterwork of transnational feminist studies and critical theory, a teachable work of feminist anti-Zionism from the perspective of a Mizrahi welfare mother and critical scholar-the like of which does not exist."-Brooke Lober, Feminist Formations -- Brooke Lober * Feminist Formations * "Rarely one encounters a comprehensive, nuanced, insightful, and realistic exposition on Israeli society packaged in such a slim book. Wrapped in the Flag of Israel is such a research and book. The work is extraordinary, imaginative, and creative; it is a fruitful presentation of the anthropological imagination's tremendous abilities to see a social world encapsulated in a drop of 'fieldwork.' Indeed, this is a tour de force of the unique abilities reserved to anthropology's insight production."-Meir Amor, Arab Studies Quarterly -- Meir Amor * Arab Studies Quarterly * "At the crossroads between a coursebook, a piece of writing about life and a feminist manifesto, Wrapped in the Flag of Israel . . . [is] both an enlightening insight into Israeli intra-racism and an original and valuable connection between two seemingly unrelated concepts: bureaucracy and torture."-Sorina Georgescu, Hypercultura -- Sorina Georgescu * Hypercultura * "Lavie has written a brave and scholarly auto-ethnography using an extended case study method, of a social movement in contemporary Israel. . .

Smadar Lavie spent nine years as a tenured professor of anthropology at the University of California, Davis, and is currently a visiting scholar at the University of California, Berkeley's Department of Ethnic Studies and a visiting professor at the Institute for Social Science in the Twenty-First Century at University College Cork, Ireland. She is the author and coeditor of several books, including The Poetics of Military Occupation: Mzeina Allegories of Bedouin Identity under Israeli and Egyptian Rule. The first edition of Wrapped in the Flag of Israel won honorable mention from the Association of Middle East Women's Studies and was a finalist for the Clifford Geertz Prize from the Society for the Anthropology of Religion. Lavie won the 2009 Gloria Anzaldua Prize from the American Studies Association.

Note on Transliteration Introduction: Marching on Jerusalem with Israel's Single Mothers "Reaganomics," Hok HaHesderim, and the Oslo Boomtime The Hudna Knafonomics: Vicky and I On Ethnographic Data Wrapped in the Flag of Israel's Bureaucracy: A Road Map Chapter 1. Left Is Right, Right Is Left: Zionism and Israel's Single Mothers Had Horit: Notes on the Hebrew Etymology of Single Motherhood The Typology of Israel's Single Mothers On Zionism Why Mizrahim Support the Right Wing Why Mizrahi Feminists' Hands Are Tied Chapter 2. Protesting and Belonging: When the Agency of Identity Politics Becomes Impossible Figurations of Agency Protesting and Belonging: An Argument in Six Parts Capturing and Conveying Elusive Bureaucratic Torture Chapter 3. Take 1: The GendeRace Essence of Bureaucratic Torture Classificatory Schemes of Bureaucratic Logic Negative Communitas: Bureaucracy's "Tough Love" The Plus-Minus Model of Torture The Zone of Repulsion: Plus-Plus Relationships of Pain Documents as Implements of Torture Bureaucracy's Essence: GendeRace Response to Bureaucracy: Bracketing Impossible Articulation, Impossible Agency Chapter 4. Take 2: Ideology, Welfare, and Single Mothers Chapter 5. Take 3: Diary of a Welfare Mother Chapter 6. The Price of National Security Knafoland-The End This Is Exactly What We Did Epilogue: Israel, Summer 2011 Afterword(s): Gaza 2014 and the Mizrahi Predicament Bureaucratic Torture: When Agency Becomes Impossible Agency Torture One People One Heart: The War on Gaza 2014 The New Black Panthers, or HaLo Nehmadim Hok HaHesderim 2014 Labor Hill B-Jamusin The Hamas Salary Fiasco Operation Brother's Keeper The War on Gaza-Protective Edge Under the Smokescreen of War Elections 2015: The Center Moves Further to the Right The Mizrahi Cultural Renaissance The Steady Drumbeat of Eternal Return Acknowledgments Notes Glossary of Hebrew, Arabic, and Yiddish Terms References Index