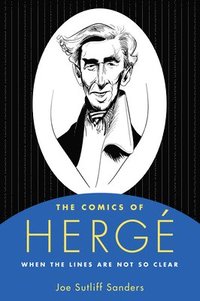 The Comics of Herge

When the Lines Are Not So Clear

av Joe Sutliff Sanders
Inbunden Engelska, 2016-06-27
789
Köp
Spara som favorit
Finns även som
Visa alla 3 format & utgåvor
As the creator of Tintin, Herge (1907-1983) remains one of the most important and influential figures in the history of comics. When Herge, born Georges Prosper Remi in Belgium, emerged from the controversy surrounding his actions after World War II, his most famous work leapt to international fame and set the standard for European comics. While his style popularized what became known as the ""clear line"" in cartooning, this edited volume shows how his life and art turned out much more complicated than his method. The book opens with Herge's aesthetic techniques, including analyses of his efforts to comprehend and represent absence and the rhythm of mundaneness between panels of action. Broad views of his career describe how Herge navigated changing ideas of air travel, while precise accounts of his life during Nazi occupation explain how the demands of the occupied press transformed his understanding of what a comics page could do. The next section considers a subject with which Herge was himself consumed: the fraught lines between high and low art. By reading the late masterpieces of the Tintin series, these chapters situate his artistic legacy. A final section considers how the clear line style has been reinterpreted around the world, from contemporary Francophone writers to a Chinese American cartoonist and on to Turkey, where Tintin has been reinvented into something meaningful to an audience Herge probably never anticipated. Despite the attention already devoted to Herge, no multi-author critical treatment of his work exists in English, the majority of the scholarship being in French. With contributors from five continents drawing on a variety of critical methods, this volume's range will shape the study of Herge for many years to come.
Visa hela texten

"After five decades of critical discussions on Herge and Tintin, is there anything left to say on the most famous French-language comics creator and his acclaimed body of work? The Comics of Herge answers the challenge of venturing new interpretations of a classic yet endlessly inspiring corpus. Drawing from multiple fields of enquiry--philosophy, aesthetics, psychology, narratology, history, poetics, musicology, sociology, film studies, art history, myth analysis, politics, and comics theory--the contributions included in Sanders's collection re-examine the visual, ideological, and storytelling devices at play in one of the most 'iconic' creations in comics history and their influence on post-Hergean ligne claire experimentations. The chapters with a thematic approach (appraising the recurrence of motifs ranging from the nothingness prevalent in Tintin in Tibet to the mechanical modernity and narrative acceleration of Herge's airplanes) complement those that offer new considerations on Herge's aesthetics (his stylistic evolution, his narrative patterns, his representation of violence, his late predilection for simulacra and reflexivity), as well as those that explore the posterity of Hergean tropes and iconography. As a whole, this collection sheds new light on an author whose work emerges here once again not as a critical terminus, but as a source of enduring fascination.""- Fabrice Leroy, professor of French and Francophone studies at the University of Louisiana at Lafayette, comics scholar, and author of Sfar So Far: Identity, History, Fantasy, and Mimesis in Joann Sfar's Graphic Novels

Joe Sutliff Sanders is associate professor in the children's literature track of the English Department at Kansas State University. He is author of A Literature of Questions: Nonfiction for the Critical Child and Disciplining Girls: Understanding the Origins of the Classic Orphan Girl Story, coeditor of a collection of essays on The Secret Garden, and former Fulbright Fellow at the University of Luxembourg.