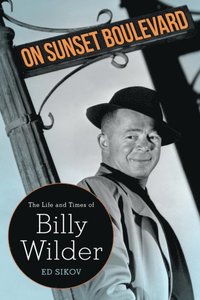 The Life and Times of Billy Wilder

av Ed Sikov
E-bok (EPUB - DRM), Engelska, 2017-06-14
219
Ladda ned
Spara som favorit
Laddas ned direkt
Läs i vår app för iPhone, iPad och Android
Finns även som
Visa alla 1 format & utgåvor
On Sunset Boulevard, originally published in 1998, describes the life of acclaimed filmmaker Billy Wilder (1906-2002), director of such classics as Sunset Boulevard, The Lost Weekend, The Seven Year Itch, and Sabrina. This definitive biography takes the reader on a fast-paced journey from Billy Wilder's birth outside of Krakow in 1906 to Vienna, where he grew up, to Berlin, where he moved as a young man while establishing himself as a journalist and screenwriter, and triumphantly to Hollywood, where he became as successful a director as there ever was.Double Indemnity, Sunset Boulevard, Some Like It Hot, and The Apartment&quoteWilder's cinematic legacy is unparalleled. Not only did he direct these classics and twenty-one other films, he co-wrote all of his own screenplays. Volatile, cynical, hilarious, and driven, Wilder arrived in Hollywood an all-but-penniless refugee who spoke no English. Ten years later he was calling his own shots, and he stayed on top of the game for the next three decades. Wilder battled with Humphrey Bogart, Marilyn Monroe, Bing Crosby, and Peter Sellers; kept close friendships with William Holden, Audrey Hepburn, Jack Lemmon, and Walter Matthau; amassed a personal fortune by way of blockbuster films and shrewd investments in art (including Picassos, Klees, and Mir's); and won Oscars--yet Wilder, ever conscious of his thick accent, always felt the sting of being an outsider.On Sunset Boulevard traces the course of a turbulent but fabulous life, both behind the scenes and on the scene, from Viennese cafes and Berlin dance halls in the twenties to the Hollywood soundstages of the forties and the on-location shoots of the fifties and sixties. Crammed with Wilder's own caustic wit, On Sunset Boulevard reels out the story of one of cinema's most brilliant and prolific talents.
Visa hela texten