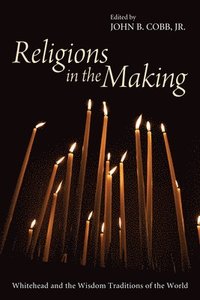 Religions in the Making

av John B Cobb Jr
Inbunden Engelska, 2012-11-06
399
Köp
Spara som favorit
Skickas inom 10-15 vardagar.
Fri frakt inom Sverige för privatpersoner.
Beställ senast imorgon kl 17:30 för leverans innan jul!
Finns även som
Visa alla 1 format & utgåvor
Description:
Whitehead had a place for God in his comprehensive cosmological vision, and his theism has long attracted interest from some Christian theologians. But Whitehead's ideas have much wider use. Some Buddhists have found help in articulating their nontheistic vision and relating it to the current world of thought and action. In this book religious writers in seven different traditions articulate how they can benefit from Whitehead's work. So this volume demonstrates that various features of his thought can contribute to many communities.

According to his followers, Whitehead shows that the deepest convictions and commitments of the major religious communities can be complementary rather than in conflict. Readers of this book will see how that plays out in some detail. A Whiteheadian Hindu can recognize the truth in a Whiteheadian Judaism, and both can appreciate the insights of Chinese Whiteheadians committed to their classical thinking. Perhaps a new day in interreligious understanding has come.

Endorsements:
"Cobb has assembled important essays from scholars representing the major world religions, some senior in their fields and others speaking with the voice of the future. These essays demonstrate the ever-increasing usefulness of Whiteheadian metaphysics for the intellectual life of religion today."
--Robert Neville, Professor of Philosophy, Religion, and Theology, Boston University

"Religions in the Making brings a range of voices together to consider . . . how our religions can still surprise us, because our God is creative (of course!) and our future is unscripted. As I read I kept thinking, 'This chapter alone is worth the price of the book.' For both those new to process theology and those well-read, this book will be stimulating and enjoyable."
--Brian D. McLaren, author of A New Kind of Christianity

"The essays in Religions in the Making are rich, thick, and deep. Cobb, whose persistent labor over the past half-century has been to interpret Christian faith and practice through a Whiteheadian-processive lens, has charted the way for the careful and excellent reflections of his essayists. In these chapters we encounter many of the creative ways Whitehead's vision of reality can inform visionary, yet faithful, religious reflection from within a wide variety of traditions."
--Michael Lodahl, Professor of Theology and World Religions, Point Loma Nazarene University

"This collection fulfills, amply and engagingly, the prediction Cobb makes in the preface: 'anyone who puts on Whiteheadian glasses will see the world in fresh and valuable ways.' Wearing such glasses, religious practitioners are enabled to understand, not only themselves, but also each other more deeply and creatively."
--Paul F. Knitter, Professor of Theology, World Religions, and Culture, Union Theological Seminary

About the Contributor(s):
John B. Cobb, Jr., now retired, taught theology at the Claremont School of Theology, cofounded the Center for Pro...
Visa hela texten