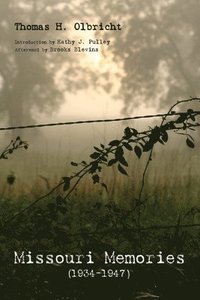 av Thomas H Olbricht, Kathy J Pulley
Häftad Engelska, 2016-07-22
199
Köp
Spara som favorit
Skickas inom 10-15 vardagar.
Fri frakt inom Sverige för privatpersoner.
Finns även som
Visa alla 1 format & utgåvor
Thomas H. Olbricht relishes his Missouri upbringing. In this book he narrates the details of his many experiences in the 1930s and 40s. The author was interested in multiple aspects of Ozark terrain, social life, and culture, and often situates them in their historical setting. He writes with multifaceted concretion regarding the influence of his mother, father, and his extended family, which included persons of Irish, Scottish, and German heritages. He not only helped with his grandfather's gas station-grocery but also his uncle's farming operations. Because of his commitment and education he has given special attention to religious activities in the Churches of Christ in the Ozarks. He ends by elaborating upon, in the region of his youth, what it was like to live through World War II and the peace that followed. ""For years to come, historians and interested observers who study the Stone-Campbell Restoration Movement as expressed through twentieth-century Churches of Christ will sooner or later encounter Dr. Tom Olbricht. This towering theologian, churchman, historian, and much more, casts a long shadow as he has influenced generations of people through his teaching and writing. This volume gives us a rare glimpse into the formative years Tom spent in Missouri and the Ozarks that he loved."" --Royce Money, Chancellor, Abilene Christian University ""This book is a wondrous memory of rural religious America that was marked by authenticity, economic realism, unaffected piety, and strong hope for betterment. Many readers of older vintage will love this reading for its familiar cadences. Many younger readers will cherish these 'olden days.' My thanks to Tom for such a vivid story so compellingly told to us."" --Walter Brueggemann, Columbia Theological Seminary ""Tom Olbricht has written an intimate memoir of growing up in the rural Ozarks of southern Missouri and northern Arkansas during the Depression and World War II years that is just fun to read, especially for those who grew up during the same period."" --Carl H. Stem, Dean Emeritus, Rawls College of Business, Texas Tech University ""What forces converge to produce a life well lived? What makes someone loyal to roots, tradition, family, and friends? What drives someone to embrace the central themes of the Christian faith as the standard for living, loving, and working? Missouri Memories never pretends to address these questions. Still, those who know Tom will discover in these pages some answers to those questions as they encounter the forces that helped create this truly extraordinary man."" --Richard T. Hughes, Scholar in Residence, College of Bible and Ministry, Lipscomb University Thomas H. Olbricht grew up in Thayer and Alton, Missouri. He received a degree from Northern Illinois and graduate degrees from Iowa and Harvard Divinity School. He is Distinguished Professor Emeritus of Religion, Pepperdine University. He and his wife Dorothy live in the Riverwoods Retirement Community in Exeter, New Hampshire. He has written or edited twenty-five books. Olbricht was a late in life friend of Paul C. Nagel who published Missouri: A History.
Visa hela texten