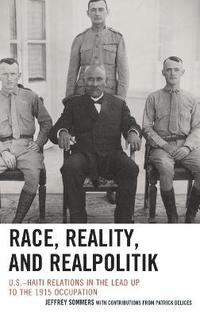 U.S.-Haiti Relations in the Lead Up to the 1915 Occupation

av Jeffrey Sommers
Inbunden Engelska, 2015-11-11
859
Köp
Spara som favorit
Skickas inom 7-10 vardagar.
Fri frakt inom Sverige för privatpersoner.
Finns även som
Visa alla 2 format & utgåvor
The year 2015 marked the centennial of the 1915 United States occupation of Haiti and Haiti's resistance to that signal event in its history. This study surveys the issues of economics, race, and realpolitik embedded in the political economy of U.S. interactions with Haiti that resulted in occupation. It then interrogates what constitutes the "state" as it pertains to foreign policy, along with an inspection of who benefits from empire. This approach eschews tired dichotomies of whether or not the United States as a whole materially benefited from empire to instead simply look at who individually gained and what were the capacities of these beneficiaries to craft policy. Next it delivers insights derived from a forensic analysis of Woodrow Wilson's perception of race and his decision to intervene in Haiti. Attitudes enabling United States military leaders to implement a policy of occupation are provided through a study of Admiral William Caperton's role in the intervention. The focus then telescopes out to inspect the role played by the press, especially as booster for commercial opportunities. In short, the project answers the questions of why, who, and how American empire was undertaken through the case study of Haiti and its occupation in 1915.
Visa hela texten

Jeffrey Sommers delivers a powerful and highly instructive work. The successful slave revolt in Haiti, culminating in 1804, was an event of historic significance, establishing the first free society in the western hemisphere. Haitians have been bitterly punished by the great powers ever since for that achievement. Woodrow Wilson's invasion a century ago was another severe blow, from which Haiti has yet to recover. This compelling study, drawing together many diverse factors and using a rich variety of primary sources, not only provides new and valuable insights into the events and their background, but also into the making of imperial policy and its beneficiaries. -- Noam Chomsky, MIT Jeffrey Sommers provides us with essential reading at the centennial of the U.S. occupation of Haiti. His book details the forces propelling this signal event in Haiti's history. It reveals the tenacity of old fashioned racial taxonomies and their intersection with the then newly emergent economic forces in the U.S., to deliver a distinctive political economy of Wilsonian interventionism in Haiti. In the end it raises questions about who the "real" savages are. A must read for those wishing to understand the antecedents for those preaching American exceptionalism today. -- Patrick Bellegarde-Smith, University of Wisconsin-Milwaukee Why did the United States send troops into Haiti in 1915? How could Woodrow Wilson's ideas of 'democracy' include military takeover of a sovereign nation? How could the occupation continue for nearly twenty years? Jeffrey Sommers uses innovative research to trace the 'road to occupation' of Haiti through documents that clarify the racial and imperial politics of the era. Haitian nationalism, still forceful a century after the country's 1804 revolution, could not hold out. Wilson's racialized 'democracy' persisted until he found a pretext for sending in the marines. Haiti became a model for America's relations with 'little brothers,' with segregation and military dominance. -- Patrick Manning, University of Pittsburgh

Jeffrey Sommers is associate professor of political economy and public policy in Africology and global studies and senior fellow at the University of Wisconsin-Milwaukee. Patrick Delices holds an MBA from NYU Stern School of Business and an MPA from Columbia University.