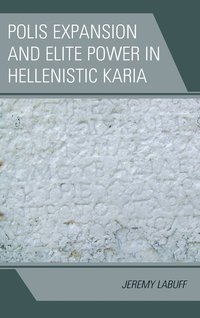 av Jeremy Labuff
Inbunden Engelska, 2015-12-17
959
Köp
Spara som favorit
Finns även som
Visa alla 2 format & utgåvor
In the third and second centuries BC, the city-states of Karia began to assert their independence in a rather noticeable way: they merged into larger polities. In order to explain why they did so, Polis Expansion and Elite Power in Hellenistic Karia rewrites the history of the region, which has traditionally been seen as dominated by empires and home to communities whose claims of freedom and democracy were a sham. With a detailed study of epigraphical, literary, and archaeological evidence, this study reveals a high level of local agency, as communities sought to shape their own destiny at moments of imperial weakness or withdrawal. Not everyone in these communities benefited equally from these mergers. Elites in particular reaped unique gains that provided them with access to well-connected cities or to regionally important sanctuaries, both of which represented important avenues for self-advertisement and status acquisition. Although these benefits suggest the ability of the wealthy to influence decisions that impacted entire communities, such influence did not spell the decline and fall of democracy for these city-states. Rather, they illustrated the complex power relationships that defined the practice of democracy as it continued to evolve alongside the momentous rise and fall of Hellenistic empires, until the ascendancy of Rome curtailed popular government in the region permanently. This study furthers our understanding of the political landscape of Karia, the balance of power within the Hellenistic polis, the impact of interstate relations on local politics, and political and social identity within ancient democratic states.
Visa hela texten

[This book] focuses on the fascinating area of Hellenistic Caria, perhaps the region with the strongest continuities between the fourth century and the Hellenistic period. This is a significant contribution to the study of the Greek poleis, which is usually dominated by an image of the polis as a selfenclosed entity and in which Hellenistic poleis rarely provide food for thought for those scholars focusing on the archaic and classical periods.... But what distinguishes it from the usual dossier of Hellenistic inscriptions is the wider argument that focuses on the dominant role of the elites of Hellenistic communities as the major beneficiaries - economically, politically, and socially - from the processes of polis expansion. This focus on the divergent agency of different groups within ancient communities is a significant contribution that should make us rethink the usual polarities that we employ in the study of archaic and classical poleis (e.g. the polis versus the aristocracy). * Greece & Rome * Questions about changes in the political culture of Greek poleis in the Hellenistic period, the role of democratic institutions, of elite authority, power, and the impact of kings have long engaged historians. Looking through the lens of a concentrated, scrupulous study of the evidence for inter-polis unions called sympoliteiai in Karia, Jeremy LaBuff offers a nuanced and illuminating new take on both the meaning of this institution in the Hellenistic world and an important contribution to the larger debates about change in the political culture of the Hellenistic world. Particularly important are his efforts to tease out the multiplicity of interests at work and his insistence on the crucial role of local conditions. Polis Expansion and Elite Power in Hellenistic Karia will appeal then not only to experts in southwestern Asia Minor in the Hellenistic period but also to historians working broadly on the transformations the Greek world underwent from the Classical to Hellenistic period. -- Gary Reger, Trinity College

Jeremy LaBuff is lecturer of history at Northern Arizona University.

Introduction: The Implications of Sympoliteia for the Political Identity of the Hellenistic polis Chapter 1: Histories of Karia Chapter 2: The sympoliteiai of Karia Chapter 3: Finding Elite Activity & Motivation: a Prosopographical Analysis