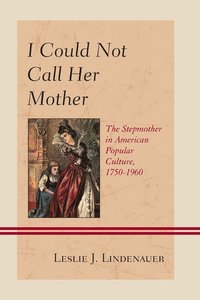 I Could Not Call Her Mother

av Leslie J Lindenauer
Häftad Engelska, 2015-08-25
379
Köp
Spara som favorit
Skickas inom 5-8 vardagar.
Gratis frakt inom Sverige över 159 kr för privatpersoner.
Finns även som
Visa alla 2 format & utgåvor
Stories of the stepmother, the substitute mother, or the "other mother" have infused popular culture for centuries and continue to do so today. She plays a substantial role in our collective imagination, whether we are a part of a step family or not. Despite the fact that the stepmother remains a prevalent figure, both in popular culture and reality, scholars have largely avoided addressing this fraught figure. I Could Not Call Her Mother explores representations of the stepmother in American popular culture from the colonial period to 1960. The archetypal stepmother appears from nineteenth-century romance novels and advice literature to 1930s pulp fiction and film noir. Leslie J. Lindenauer argues that when considered in her historic context, the stepmother serves as a bellwether for changing constructions of motherhood and family. She examines popular culture's role in shaping and reflecting an increasingly normative middle class definition of the ideal mother and family, which by the 1920s became the dominant construct. Lindenauer adds to the rich and growing literature on the history of motherhood. It echoes and is informed by the scholarship that has defined ideal motherhood as a moving target, historically constructed. In so doing, it illuminates the relationship between ideal motherhood and ideal womanhood.
Visa hela texten

Using popular magazines, novels, films, television programs, and professional and prescriptive literature, Lindenauer describes the archetypal, fairy-tale stepmother through US history from the mid-18th century to the 1950s. The author posits that in response to various factors--industrialism, urbanization, economic depression, war, the breakup of the nuclear family, and the ensuing legal, social, economic, and cultural upheavals--the socially constructed image of the stepmother oscillated between the evil stepmother and the good stepmother. The representation of the stepmother in popular culture began as a negative one, embodied as the evil witch of fairy tales and the 17th-century Salem witchcraft trials and continuing with the evil stepmother in the 18th and first half of the 19th centuries. The image changed into the sympathetic stepmother between 1860 and 1917, then returned to a darker and more threatening image under the influence of psychotherapy during the Great Depression and WW II, only to be rehabilitated as the good stepmother in service to childless couples looking to adopt and single fathers needing wives in the 1950s. For anyone interested in stepmothers, family history, women's studies, and popular culture. Summing Up: Recommended. Lower-division and upper-division undergraduates. * CHOICE *

Acknowledgments Prologue: A Tale of Two Stepmothers Introduction Chapter One: 'Unbounded in her Malice': From Witches to Stepmothers in Early America Chapter Two: 'I Could Not Call Her Mother': The Stepmother and Middle Class Virtue in Antebellum America Chapter Three: The Substitute Mother in the Nineteenth Century: Gender, Race, and Parenthood Chapter Four: The Educated [Step] Mother: The Stepmother and the Science of Motherhood in the Progressive Era Chapter Five: The Family in the Funhouse Mirror: Periodicals, Pulps, and Film, 1920-1945 Chapter Six: Tunnel of Love: Motherhood Composed in the Post-War Era Selected Bibliography