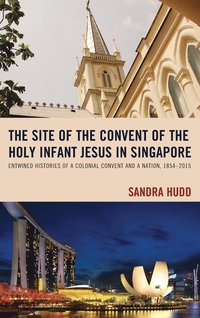 Entwined Histories of a Colonial Convent and a Nation, 1854-2015

av Sandra Hudd
Inbunden Engelska, 2016-06-17
959
Köp
Spara som favorit
Skickas inom 10-15 vardagar.
Fri frakt inom Sverige för privatpersoner.
The Site of the Convent of the Holy Infant Jesus in Singapore: Entwined Histories of a Colonial Convent and a Nation, 1854-2015 explores key issues and developments in colonial and postcolonial Singapore by examining one particular site in central Singapore: the former Convent of the Holy Infant Jesus, established in 1854 and now a food and entertainment complex. The Convent was an early provider of social services and girls' education-almost a mini-city within walls, including a thriving community of schools, an orphanage, and a women's refuge. World War II and the Japanese occupation, followed by the creation of the new Republic of Singapore, presented a new set of challenges, but it was the convent's size and prime location that made it attractive for urban redevelopment in the 1980s and led to government acquisition, demolition of some buildings, and the remainder put out to private tender. The chapel and the former nuns' residence are classified as National Monuments but, in line with government policy of adaptive re-use of heritage sites, the complex now contains bars and restaurants, and the deconsecrated chapel is used for wedding receptions and events. Tracking the physical and usage changes of the site, this book works to make sense of that eventful journey, a paradoxical journey that moves only in time, not in space, and includes abandoned babies, French nuns, Japanese bombings, and twenty-first century dance parties. In a society that has undergone massive change economically and socially, and, above all, transitioned from a small colonial enterprise to a wealthy independent city-state, those physical changes and differing usages of the Convent site over the years track the changes in the nation. The wider ongoing tensions between heritage conservation and the modern global city are explored by examining what has been chosen for preservation, the quintessentially Singaporean hybridity of the commercial reuse of historic buildings, as well as the nostalgia for what has been lost.
Visa hela texten

Sandra Hudd tells the absorbing story of colonial and post-colonial Singapore from a distinctive perspective: that of a particular site and the purposes of its occupants. The site was for nearly 130 years in the hands of the Convent of the Holy Infant Jesus. Now, updated and commercialized, it is Chijmes, designed to attract tourists, shoppers, and fine diners. Dr. Hudd argues that heritage conservation, a problem in many cities, is in an especially ambiguous position in restlessly changing Singapore. Her thoughtful book and its many insights will be welcomed not only by historians of Southeast Asia, but also by those, there and elsewhere, concerned with repurposing built heritage. -- Nicholas Tarling, University of Auckland CHIJ Victoria Street holds a very special place in the hearts and minds of many generations of Singaporean women who take pride in being 'Convent girls.' Sandra Hudd, however, shows us that CHIJ was not only a school but a place that reflected the fast-paced history of Singapore, from its beginnings as a colonial nation to its traumatic experiences during the Japanese occupation, and then to its current dramatic changes as a young nation aspiring for cosmopolitanism. A riveting read of a humble convent which inadvertently became a metaphor and a symbol for a nation's history and its urban re-imaginings. -- Catherine Gomes, Senior Lecturer, School of Media and Communication, RMIT University Sandra Hudd ably analyzes empire and Christian missionaries by highlighting the impact of a Catholic convent in British Singapore. She demonstrates that the instruments of colonization and decolonization of Singapore continue to influence the nation's aspirations and development. This book draws on history, social geography, religion, urban studies, and heritage conservation and is complemented with personal narratives, contemporary media reports, and visual images from historical and contemporary photographs. -- Cecilia Leong-Salobir, University of Wollongong A timely and important addition to the historiography, this book brings together the colonial and post-colonial worlds in a vivid and innovative analysis. Hudd presents a skillful yet sensitive examination of the complex interrelationship between empire, gender, memory, place, and space. -- Ernest Koh, Monash University Through a rich account of the site of the Convent of the Holy Infant Jesus, this book provides fascinating insights into the management of urban space in Singapore as a colony, an occupied territory, and a nation. Based on extensive research and innovative in approach, it will be of interest to any reader seeking a better understanding of Singapore's history and contemporary culture. -- Joanna Cruickshank, Deakin University

Bloggat om The Site of the Convent of the Holy Infan...

Sandra Hudd is university associate in the School of Humanities at the University of Tasmania.