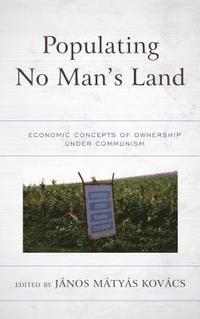 Economic Concepts of Ownership under Communism

av Janos Matyas Kovacs
Inbunden Engelska, 2018-09-15
929
Köp
Spara som favorit
Skickas inom 7-10 vardagar.
Fri frakt inom Sverige för privatpersoner.
Finns även som
Visa alla 1 format & utgåvor
This edited volume opening the new series Revisiting Communism: Collectivist Economic Thought in Historical Perspective focuses on the concepts of ownership, the cornerstone of political economy in Soviet-type societies. The authors' main objective is to contribute to the still unwritten chapter on collectivism in the history books of modern economic thought. They trace the lengthy evolution of economic ideas of property reform under communism leading from the doctrine of blanket nationalization to projects of moderate privatization in eight countries of Eastern Europe and China. The comparative analysis sheds light upon the tireless attempts of reform-minded economists in communist countries to populate the no man's land of "social property" with quasi-private economic actors such as bodies of workers' self-management and managers of state-owned companies. For a long time, these were expected to crowd out the communist nomenklatura from its actual ownership position without challenging the primacy of collective property rights. The fact that even the most radical reformers came to the conclusion that such surrogate owners would not be able to break the power of the ruling elite only on the eve of the 1989 revolutions demonstrates the immense strength of collectivist ideas. The authors coin the term "trap of collectivism" to warn those demanding nationalization or other forms of non-private ownership today: it is rather easy, even with the best intentions, to walk into this trap but it may take long decades to break out from it.
Visa hela texten

To enquire into social(ist) ownership might appear a scholastic exercise: why bother with concepts in the history of economic thought that owe more to ideology than to science, and which proved so inefficient? But granted that socialism (including all murky variants of market socialism) failed, and that property rights matter and need to be rigorously specified, widespread dissatisfaction with the results of three decades of neoliberal capitalism makes it imperative to question the dominant paradigm of privatization. This rich volume illuminates diverse alternatives across Eurasia. Notions of ownership and their institutionalization are of more than antiquarian interest as the fuzzy property relations of the recent past are revived in new forms of populist-nomenklatura ownership. -- Chris Hann, Max Planck Institute for Social Anthropology Populating No Man's Land is an outstanding contribution to the history and analysis of economic thought from within the socialist experiment of the 20th century that played out in East and Central Europe and the former Soviet Union and in China. The socialist experiment is one of the most ambitious projects in human history as it sought to radically transform the property rights and social relationships among individuals. It also failed miserably. But while there are general lessons to be learned from this failure, the key to really learning is to sort out the rhetoric from the reality in the variety of forms of property rights experiments that were tried during the history of socialism in practice. Janos Kovacs does an outstanding job of framing, contributing to and concluding the discussion on the history of the political economy of communism. Kovacs, and the other contributors to this volume, convincingly demonstrate that much of the "reform" talk was mere empty rhetoric, and the reality of real existing socialism was economic dysfunction and political privilege to those in power. It is a must read for all who want to understand the history of socialism. -- Peter Boettke, George Mason University The establishment of the communist regime, which prevailed in the Eastern Block and China in the twentieth century, was, arguably, the largest institutional experiment in human history. It destroyed private property rights in those nations, which created not only tragic consequences at that time but also long-lasting and deep social, economic, and political impacts to these nations. This volume is the first collective comparative studies of this important issue in the literature. Anyone who cares about institutions, property rights, socialism/communism, the Eastern Block and China, would benefit enormously from reading this book. -- Chenggang Xu, University of Hong Kong

Acknowledgments Introduction: Why Ownership? Why Communism? by Janos Matyas Kovacs Chapter 1: From Nationalization to Nowhere. Ownership in Bulgarian Economic Thought (1944-1989), by Roumen Avramov Chapter 2: From Control of the 'Commanding Heights' to Control of the Whole Economy and Back. Chinese Ownership Theories Since 1949, by Fan Shitao Chapter 3: From Nationalization to Privatization. Understanding the Concept of Ownership in Czechoslovakia (1948-1990), by Julius Horvath and Vitezslav Sommer Chapter 4: Ownership under East-German Communism-A One-Way Street, by Hans-Jurgen Wagener and Franz Rudolph Chapter 5: From Two to One (And Only)? Theorizing Ownership in Communist Hungary, by Janos Matyas Kovacs Chapter 6: From Soviet-type Ownership through Self-Management to Privatization. Debating Ownership in Communist Poland, by Maciej Tyminski Chapter 7: The Silence of the Herd. Exploring Ownership Concepts in Communist Romania, by Radu Ioan Simandan, Gabriel Claudiu Mursa and Vlad Pasca Chapter 8: Fighting Dogma, Rescuing Doctrine. Toward a History of Ownership Debates in Soviet Economic Literature, by Oleg Ananyin and Denis Melnik Chapter 9: Social Property and the Market. An Uneasy Symbiosis in Yugoslavia, by Joze Mencinger Conclusion: Expeditions to No Man's Land. Comparing Economic Concepts of Ownership under Communism: An Evolutionary View, by Janos Matyas Kovacs About the Contributors