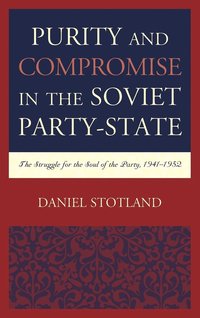 Purity and Compromise in the Soviet Party-State

av Daniel Stotland
Inbunden Engelska, 2017-11-15
1219
Köp
Spara som favorit
Skickas inom 10-15 vardagar.
Fri frakt inom Sverige för privatpersoner.
This work offers new ways of conceptualizing the decision-making paradigm of the Soviet party-state that was defined by the persistent shortage of qualified manpower that afflicted the Russian elite. The traditional Russian problems of under administration, combined with the unique features of the Soviet political system, resulted in a dichotomy between practical and ideological demands. The WWII era, examined in this book, provides a microcosm of pressures facing the Kremlin and illustrates the cyclical nature of policy formation forced on it by the paradoxes of the system. As the party's responsibilities expanded into specialized economic and military areas, political experts increasingly depended on the specialized professionals. These trends grew increased drastically during the war. An unexpected consequence of the party's expansion into economic or military professions was the discovery that cooptation worked both ways and many party members become managers rather than ideological overseers. Throughout the existential crisis of the system-the war and its aftermath-the party would find itself in a fundamental conflict over its identity, challenged over its role both vis-a-vis the state and its own priorities. After an abortive attempt to reverse the wartime trends, a new paradigm was articulated by the party during the last five years of Stalin's reign. This resulted in the emergence of a new elite consensus which envisioned the party as integral and invasive economic actor. This shift in the party's identity was the price of maintaining centralized political power and came at the expense of the focus on ideological purity. In the long term, however, the diminished role of ideology robbed the party of its core value system and steadily eroded its legitimizing and self-energizing power. Over time, the new consensus would undermine the very foundations of the party-state construct. Yet if the USSR was to survive as a modern, industrialized state, the accommodation with the technocrats was necessary. The contradiction between ideological and pragmatic aims was inherent to the system, and demanded an eventual choice between the long-term health of the state and that of the party.
Visa hela texten

All Soviet leaders struggled to balance the need for expert managers with the Leninist demand that administration be led by ideologically-committed cadres. In this detailed and innovative new study, Daniel Stotland places this 'Red' versus 'expert' problem at the center of Soviet political debates and struggles. Stotland argues that the conflict between 'Red' and 'expert' factions exacerbated the perennial problem that all Russian rulers have faced: the shortfall of skilled administrators needed to run the extensive territory of the USSR. Stotland examines the development of the Soviet state and party administration during the Great Patriotic War, a topic that has been largely ignored in previous accounts of Soviet political development. Conflict between supporters of technocracy and ideological purists was briefly resolved in favor of the experts because of the need to organize the defense of the USSR in the Great Patriotic War. Stotland examines the political conflicts that this caused and shows how the compromise that resulted from these conflicts set the scene for later Soviet decline. -- Neil Robinson, University of Limerick

Bloggat om Purity and Compromise in the Soviet Party...

Chapter 1: Cadres Decide Everything Chapter 2: The Irony of the Inferno Chapter 3: The Great Reawakening Chapter 4: The Last Puritan Chapter 5: A More Perfect Union