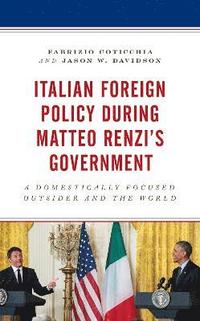 A Domestically Focused Outsider and the World

av Fabrizio Coticchia, Jason W Davidson
Inbunden Engelska, 2019-03-13
919
Köp
Spara som favorit
Skickas inom 3-6 vardagar.
Fri frakt inom Sverige för privatpersoner.
This book sets out to explain the foreign policy of Italian Prime Minister Matteo Renzi (February 2014 to December 2016). It offers a unique analytical framework to make sense of Renzi's foreign policy: the domestically-focused outsider. It argues that to untangle Renzi's foreign policy one must first understand that his clear priority was enacting domestic economic and political reforms. Domestic focus means that Renzi made foreign policy decisions with a sensitivity to public opinion and party unity. The book also argues that Renzi's status as an outsider in Italian politics-having previously served only as the mayor of Florence-provides critical insight into his foreign policy. Renzi was prone to skepticism of the establishment and dramatic, symbolic gestures rather than patient coalition building. The book applies this framework to the five most important foreign policy issues Renzi's government faced: migration, finance and the EU, Russia, ISIL, and Libya. The book's analysis of the cases benefits from over twenty elite interviews, including those with senior members of Renzi's government.
Visa hela texten

Italy's coalition of the populist Five Star Movement and the xenophobic (formerly Northern) League shocked the world with its reorientation of Italian foreign policy. The new government rejected the European Union's economic austerity, cozied up to Vladiminr Putin's Russia, and sounded the alarm about an influx of migrants and refugees. Yet, as the authors of this trenchant study argue, the building blocks for the new policy were put in place already during Matteo Renzi's term as prime minister. Promoting personality above party and running as an anti-establishment outsider preoccupied with domestic politics, Renzi unintentionally contributed to the destruction of the mainstream parties and opened the way to populist challengers who pursued many of the same foreign policies. Drawing on a wealth of evidence, including informative interviews with high-level Italian and international officials and experts, the authors make a convincing case that Renzi's model of a "domestically focused outsider" applies not only to his successors but to politicians as otherwise different as Yanis Varoufakis and Donald Trump. -- Matthew Evangelista, Cornell University, editor of Italy from Crisis to Crisis: Political Economy, Security, and Society in the 21st Century In the analysis of Italian foreign policy there are few governments that stand out, because of the personality of their leaders: it was the case of Craxi's government in the 1980s and then Berlusconi's in the 1990s and 2000. More recently it was the case of Matteo Renzi's executive. Renzi tried to revolutionize Italian politics and, at the same time, Italy's global standing: a daunting undertaking, which almost succeeded. This exhaustive volume by Davidson and Coticchia does an excellent job in explaining what happened and why Renzi failed in the end. -- Giampiero Giacomello, University of Bologna Italian Foreign Policy during Matteo Renzi's Government: A Domestically Focused Outsider and the World is a fascinating introduction to Renzi's foreign policy. Fabrizio Coticcha and Jason W. Davidson offer a provocative key to understand the domestically-driven policy of an outsider eager to present himself as a "dynamic scrapper of the status quo". The elegant analysis of Renzi's management of migration, the economic crisis, Russia sanctions, the fight of ISIL and the Libya war, not only serves to understand the uneven foreign policy of a middle power, but provides a first application of a theory of foreign policy by ever more domestically-focused (when not populist) Western governments. An excellent read for scholars, students and interested public alike. -- Sonia Lucarelli, University of Bologna The book addresses a relevant topic and contributes to our knowledge and understanding of Matteo Renzi's Government. Most analysts have focused on the role of the Italian Prime Minister in shaking Italian domestic politics rather than on his foreign policy. However, during his government, Italy played a relevant role in several international crises, that the authors reconstruct with a balanced perspective and without indulging in prejudices and stereotypes. Looking at Renzi's experience, the reader can have a better understanding not only of the leader and his government, but also of the dynamics shaping Italian (foreign) politics in this period of political turmoil. -- Marco Brunazzo, University of Trento