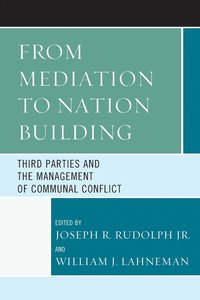 From Mediation to Nation-Building

Third Parties and the Management of Communal Conflict

av William J Lahneman
Häftad Engelska, 2017-03-01
699
Köp
Spara som favorit
Skickas inom 10-15 vardagar.
Fri frakt inom Sverige för privatpersoner.
Finns även som
Visa alla 2 format & utgåvor
The eruption in the early 1990s of highly visible humanitarian crises and exceedingly bloody civil wars in the Horn of Africa, imploding Yugoslavia, and Rwanda, set in motion a trend towards third party intervention in communal conflict in areas as far apart as the Balkans and East Timor. However haltingly and selectively, that trend towards extra-systemic means of managing ethnic and national conflict is still discernible, motivated as it was in the 1990s by the inability of in-house accommodation methods to resolve ethno-political conflicts peacefully and the tendency of such conflicts to spill into the international system in the form of massive refugee flows, regional instability, and failed states hosting criminal and terrorist elements. In its various forms, third party intervention has become a fixed part of the current international system Our book examines the various forms in which that intervention occurs, from the least intrusive and costly forms of third party activity to the most intrusive and expensive endeavors. More specifically, organized in the form of overview essays followed by case studies that explore the utility and limitations, successes and failures of various forms of third party activity in managing conflict, the book begins by examining diplomatic intervention and then proceeds to cover, in turn, legal, economic, and military instruments of conflict management before concluding with a section on political tutelage arrangements and nation/capacity building operations. The chapters themselves are authored by a mix of contributors drawn from relevant disciplines, both senior and younger scholars, academics and practitioners, and North Americans and Europeans. All treat a common theme but no attempt was made to solicit work from contributors with a common orientation towards the value of third party intervention. Nor were the authors straight-jacketed with heavy content guidelines from the editors. Their essays validate the value of this approach. Far from being chaotic in nature, they generally supplement one another, while offering opposing viewpoints on the overall topic; for example, our Italian contributor who specializes in non-government organizations offers a chapter illustrating their utility under certain conditions, whereas the chapter from an Afghan practitioner notes the downside of too much reliance on NGOs in nation-building operations. The essays also cover topics not often treated, and are written from the viewpoint of those on the ground. The chapter on creating a police force in post-Dayton Bosnia-Herzegovina, for example, reads much like a diary from the American colonel who was sent to Bosnia in early 1996 charged with that task.
Visa hela texten

A hugely comprehensive presentation of conflict management, rich with concepts and case studies to guide third party intervenors and analysts, written by a broad mixture of younger scholars and established authorities, and designed to improve understanding and practice with a `responsibility to perfect' the world. -- I. William Zartman, The Paul H. Nitze School of Advanced International Studies, Johns Hopkins University Rudolph and Lahneman have assembled a formidable range of contributors who examine the complexity of third-party intervention in communal conflicts with rigorous conceptual depth and an impressive empirical breadth, offering important insights into the conditions under which outsiders can help to build stable and democratic states after violent conflict. -- Stefan Wolff, professor of international security, University of Birmingham, England

Bloggat om From Mediation to Nation-Building

Joseph R. Rudolph, Jr., is a professor of Political Science at Towson University, has served as a Fulbright appointee to Czechoslovakia (1991-2) and Kosovo (2011-2), and has published in the field of ethnic and nationalist politics for more than 30 years. He has also frequently been a part of the democratization operations of the Organization for Security and Cooperation in Europe (OSCE) in areas of the former Yugoslavia since 1997. His more recent work includes The Encyclopedia of Modern Ethnic Conflicts (ed., 2003), Politics and Ethnicity: A Comparative Study (2006), and Hotspots in North America and Europe (2008). William J. Lahneman is an associate professor of Political Science at Towson University, and a Senior Research Scholar at the Center for International and Security Studies at Maryland (CISSM) at the University of Maryland's School of Public Policy. He holds a Ph.D. in International Relations from the Johns Hopkins University's School of Advanced International Studies, an M.A. in National Security Affairs from the Naval Postgraduate School, and a B.S. from the U. S. Naval Academy. He has held academic positions as Associate Director for Programs at CISSM and as Associate Chair of the Political Science Department at the U.S. Naval Academy. A former U.S. Navy Commander with specializations in Surface Warfare, Strategic Planning, International Negotiations, and Nuclear Propulsion, his publications include Military Intervention: Cases in Context for the Twenty-first Century (ed., 2004) and Keeping U.S. Intelligence Effective: The Need for a Revolution in Intelligence Affairs (2011).