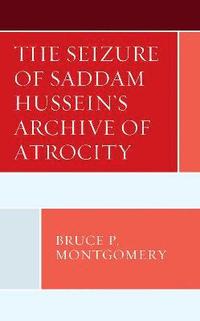 The Seizure of Saddam Hussein's Archive of Atrocity

av Bruce P Montgomery
Inbunden Engelska, 2019-10-04
809
Köp
Spara som favorit
Finns även som
Visa alla 1 format & utgåvor
The Seizure of Saddam Hussein's Archive of Atrocity examines the capture of the Baathist security files and the discovery of an invaluable Iraqi Jewish archive amid the Kurdish uprising and the US-led invasion of Iraq. The events ignited a fierce struggle for the files, which documented Saddam Hussein's vast humanitarian crimes. The various battles to control the memory of Saddam Hussein's genocidal regime and reclaim Jewish patrimony reflected Iraq's inability to confront its past. The author examines these controversies, arguing that Iraq's failure to face its totalitarian history has condemned it to a future of vengeance.
Visa hela texten

An extremely valuable, authoritative, highly informative and accurate researched book from a leading and most experienced archivist of the United States. It documents the crucial role of archivists and historians assisting persecuted people like Kurds, Jews, Christians and indeed other minorities to come to terms with their own horrible history in order to organize their own future in humanity, democracy, social justice and also in gender equality. The Kurdish archives are for them of similar importance like the former GDR "Stasi"-Archives for Germans. Similarly, it will be up to the Iraqi Kurds now to use these files for sweeping democratic reforms and hopefully not for new infighting, fragmentation, bloodshed and continued submission to foreign influence. And the Saddam Hussein's Regime files should on the one hand be used to assess independently why and how it emerged to a kind of an Arab Stalinist Gulag reign of terror and should on the other hand serve as basis for a new national dialogue of reconciliation with the main aim to stabilize and reconstruct Iraq in an escalating struggle for a new post-colonial order of the Middle East. -- Ferdinand Hennerbichler, University of Sulaimaniyah This is a fascinating and close to comprehensive account of the transfers of large caches of pre-2003 Iraqi regime files to the United States before and after the U.S. invasion. Interesting for scholars of Iraq and a must-read for those concerned about the ethics of removing a country's historical and cultural patrimony for external safekeeping and analysis. -- Joost Hiltermann, International Crisis Group A fascinating overview of the history of archives in Iraq and the dilemmas facing seizure of records from an authoritarian regime. Montgomery, a well-known archivist, presents a number of events related to the Baathist archives, the Kurdish and the Jewish archives, and addresses how the lines between restitution and retribution become complicated. -- Joseph Sassoon, Georgetown University Bruce Montgomery's book provides a rich history of the controversies over the fate of Iraqi records and archives. He expertly weaves Middle East history, international law, and archival principles into a compelling narrative of captured and seized Iraqi records that places them in historical and political context. Montgomery covers a lot of ground exploring everything from Kuwaiti records captured by Iraq to the fate Iraqi Jewish archives, but also manages to capture crucial historical details and the unique nuances of each group of records. He provides a balanced and thoughtful account of the legal, ethical, and cultural controversies over these different groups of Iraqi records. This book belongs on the shelf of historians, lawyers, and archivists interested in the complex issues of Iraqi records and archives displaced by war. -- Douglas Cox, City University of New York School of Law

Bruce P. Montgomery is former professor and Director of Archives at the University of Colorado.