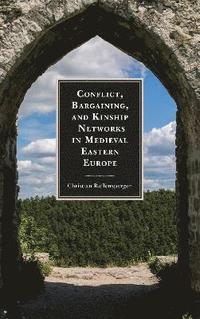 av Christian Raffensperger
Inbunden Engelska, 2018-03-15
1089
Köp
Spara som favorit
Skickas inom 10-15 vardagar.
Fri frakt inom Sverige för privatpersoner.
Conflict, Bargaining, and Kinship Networks in Medieval Eastern Europe takes the familiar view of Eastern Europe, families, and conflicts and stands it on its head. Instead of a world rife with civil war and killing, this book presents a relatively structured environment where conflict is engaged in for the purposes of advancing one's position, and where death among the royal families is relatively rare. At the heart of this analysis is the use of situational kinship networks-relationships created by elites for the purposes of engaging in conflict with their own kin, but only for the duration of a particular conflict. A new image of medieval Eastern Europe, less consumed by civil war and mass death, will change the perception of medieval Eastern Europe in the minds of readers. This new perception is essential to not only present the past more accurately, but also to allow for medieval Eastern Europe's integration into the larger medieval world as something other than an aberrant other.
Visa hela texten

Christian Raffensperger gives us a new understanding of conflict in medieval Eastern Europe. He explores the highly complex relations between conflict resolution and kinship networks. Original, theoretically innovative, vividly written, and well-constructed, this is a path-breaking work shedding considerable light on a key component of medieval politics in Eastern Europe. -- Florin Curta, University of Florida Elucidating the necessarily trans-realm, regional nature of haute politique in eleventh- and twelfth-century Eastern Europe, with its continuously shifting family alliances within and across the borders of often unstable polities, Christian Raffensperger has crafted a meticulously researched, innovative monograph with an originally formulated leitmotif-concept-the `situational kinship network.' -- David Goldfrank, Georgetown University Another Raffensperger cannon ball through the conceptual wall between Eastern and Western medieval Europe. Conflict, Bargaining, and Kinship Networks in Medieval Eastern Europe takes great strides toward normalizing the history of Rus by replacing the image of incessant civil war with a story of bargaining for power through formalized, largely bloodless conflict within a relatively stable and functioning polity. Christian Raffensperger shows how in both the plastic use of kin networks and levels of conflict the politics of eastern European families resembled that of their western European counterparts. Let the walls come down. -- Leonora Neville, University of Wisconsin-Madison Christian Raffensperger's book is a major interpretation of medieval politics in Rus'. Raffensperger offers an innovative explanation of numerous conflicts among the ruling elite as a tool for bargaining between individuals, families, and clans. Raffensperger advances our understanding of kinship politics by convincingly demonstrating how the terms of kinship were challenged and negotiated during such conflicts. This study defies modern nationalism and isolationism by taking the reader to the fascinating world of medieval kinship networks that crossed national and ethnic boundaries. -- Sergei Bogatyrev, University College London

Christian Raffensperger is associate professor of history at Wittenberg University.