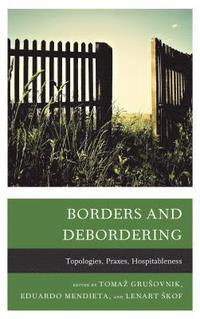 av Tomaz Grusovnik, Eduardo Mendieta, Lenart Skof
Inbunden Engelska, 2018-04-15
1039
Köp
Spara som favorit
Skickas inom 10-15 vardagar.
Fri frakt inom Sverige för privatpersoner.
Borders / Debordering: Topologies, Praxes, Hospitableness engages from interdisciplinary and transnational perspectives some of the most important issues of the present, which lay at the intersection of physical, epistemological, spiritual, and existential borders. The book addresses a variety of topics connected with the role of the body at the threshold between subjective identities and intersubjective spaces that are drawn in ontology, epistemology and ethics, as well as with borders inscribed in intersubjective, social, and political spaces (such as gender/sexuality/race, human/animal/nature/technology divisions). The book is divided in three sections, covering various phenomena of borders and their possible debordering. The first section offers insights into bordering topologies, from reflections on the U.S. border to the development of the concept of the "border" in ancient China. The second section is dedicated to practices as well as intellectual ontologies with practical implications bound up with borders in different cultural and social spheres - from Buddhist nationalism in Sri Lanka and Myanmar to contemporary photography with its implications for political systems and reflections on human/animal border. The third section covers reflections on hospitality that relate to migration issues, emerging material ethics, and aerial hospitableness.
Visa hela texten

It is the edges and borders of the world that tell us most about the world. The essays collected here thus shed important critical light, not only on specific border sites, but also on a range of key contemporary issues of world-wide significance. Including essays from many different disciplinary perspectives, this is a volume that demonstrates the true breadth of the horizons that the study of borders opens up. -- Jeff Malpas, Distinguished Professor, University of Tasmania This stunning collection of essays reflects on the philosophical, political, ethical, and practical status of borders, and not only reminds us that borders are contingent, historically shifting constructs, but also challenges us to rethink borders in ways that are less lethal and more life affirming. Spanning disciplines and nations, this timely volume is itself a border-crossing that opens up new approaches to the question of national and, perhaps more importantly, conceptual borders. -- Kelly Oliver, W. Alton Jones Professor of Philosophy, Vanderbilt University In an age where borders have emerged once again as the central excuse to separate us from others, it is vital to think again what these divisions entail. This collection does not simply unmask our border's political, social, and geographical function, but also demands we take a stance against them. Although this stance is interpreted differently by each contributor, they all request to take seriously into consideration its existential implications-in other words, how borders are meant to annihilate us. This annihilation, as the editors point out in the introduction, does not only refer to physical, epistemological, and spiritual borders, but also existential ones which are the first that request our attention. An attention this book provides from an interdisciplinary, hermeneutical, and transnational perspective. -- Santiago Zabala, ICREA, University of Barcelona, ICREA Research Professor of Philosophy at the Pompeu Fabra University