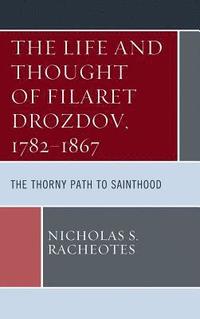 The Thorny Path to Sainthood

av Nicholas S Racheotes
Inbunden Engelska, 2018-10-15
1269
Köp
Spara som favorit
Skickas inom 10-15 vardagar.
Fri frakt inom Sverige för privatpersoner.
Finns även som
Visa alla 1 format & utgåvor
The Life and Thought of Filaret Drozdov, 1782-1867: The Thorny Path to Sainthood is an intellectual biography of the foremost historical figure in the religious world of nineteenth-century Russia. The product of decades of archival research, most of which was in the Russian language, this is the first book-length study of St. Filaret in English. The volume is designed for specialists engaged in imperial Russian history, students in upper-level undergraduate or graduate courses, and for readers interested in Eastern Orthodox spirituality, and observers of the contemporary Russian scene who wish to understand traditional church/state relations. Deeply researched and including a formidable bibliographic component, the volume also serves as a reference guide to scholars desiring to study, at greater length, one of the many topics raised. Racheotes argues that Filaret was far more than a neo-patristic theologian steeped in the tradition of the Eastern fathers. He was simultaneously a valued monarchal apologist and a guardian of the privileges of the Russian Orthodox Church to the point of subtly resisting the state. By means of translation, select passages from sermons, letters, and official reports are available in English for the first time. Often preaching before three reigning tsars, writing or editing such monumental documents as Alexander I's will and Alexander II's decree emancipating the Russian serfs, leading the drive for a Russian translation of the Bible, and preparing Orthodox catechisms are but a few examples of St. Filaret's historical importance. His centrality to policy formation with respect to the so called Old Believers, his incessant campaigns for clerical education reform, and for translation into Russian of the seminal works of Eastern theologians account for the enduring influence attributable to this Archbishop. Today, his pronouncements are enjoying a revival among a new generation of religious historians in Russia and are often adduced by a host of contemporaries arguing for Russian exceptionalism.
Visa hela texten

Nicholas S. Racheotes has written the most extensive study in English of the great nineteenth-century churchman, St. Filaret Drozdov Metropolitan of Moscow. Racheotes weaves Filaret's everyday life together with his thoughts on Orthodox Christianity, the leading religious, political, and social issues of the day, and his actions in bringing Russian Orthodoxy into the modern world to give the reader a sense of Filaret's importance both in his own day and in modern day Russia. Through extensive quotations from Filaret's sermons, Racheotes gives the reader insight into Russian preaching in the nineteenth century, a field of Russian literature almost completely ignored in western scholarship. -- Robert Nichols, St. Olaf College Metropolitan Filaret (Drozdov) was a towering figure in the nineteenth-century Russian Orthodox Church-a prolific writer and powerful authority, but oddly neglected in the historiography. This pioneering biography draws upon the immense corpus of published sources to provide the first, long-overdue account of St. Filaret's thought and his role in addressing a wide range of critical issues. -- Gregory Freeze, Brandeis University