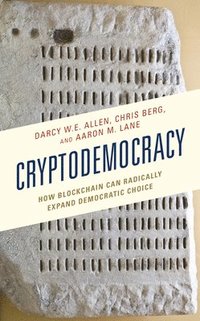 "The problem of democracy is that it simultaneously invests power in the people while removing any incentive to use their power wisely. Cryptodemocracy is a thorough and rigorous investigation into an innovative solution: Turn votes into a kind of tradeable property right and allow voting markets. New blockchain technologies allow us to overcome the problems of older voter market proposals. This is a book that deserves to be widely read and discussed-and we owe it to ourselves to experiment with its suggestions." -- Jason Brennan, Georgetown University and author of Against Democracy "Public choice theory has now ossified around the conventional practices of voting and legislation. In this volume, Darcy Allen, Chris Berg, and Aaron Lane show how that ossification might be transcended by bringing ideas from blockchain technology to bear on democratic governance. While the authors recognize that they have not written the final word on this topic, they have surely created a template that will provide analytical points of departure for pursuing political economy in new directions." -- Richard E. Wagner, George Mason University "We stand on the edge of revolution not just in the way democracy works, but in the very idea of what democracy can be. Blockchain technology can immediately solve all the problems of voter fraud, low turnout, and expensive recounts, while expanding the ability of citizens to delegate their votes and register their views on important topics that are now decided behind closed doors. This landmark book is the first thing I've seen that understands the potential, both benefits and risks, of the cryptodemocracy on the horizon - a turning point in the literature connecting political science and technology." -- Michael C. Munger, Duke University