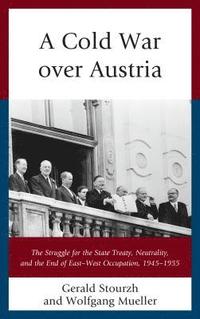 A Cold War over Austria

The Struggle for the State Treaty, Neutrality, and the End of East-West Occupation, 1945-1955

av Gerald Stourzh, Wolfgang Mueller
Inbunden Engelska, 2018-11-12
1699
Köp
Spara som favorit
Skickas inom 10-15 vardagar.
Fri frakt inom Sverige för privatpersoner.
After World War II, Austria was occupied by Soviet, American, British, and French forces. This study provides the history of the treaty that was negotiated in order to end this occupation. In the Moscow Declaration of 1943, the United States, Great Britain and the Soviet Union had declared that Austria should be liberated from Nazi rule and reconstructed as an independent state. After the war, however, this goal was soon overshadowed by security and power considerations, and then by the Cold War. While the West strove to safeguard Austria's independence from communist expansion, the USSR refused to finalize a treaty and to withdraw from its zone in the eastern part of the country. In the end it took until 1955 to come to an agreement and receive Soviet consent for a treaty. An important Soviet precondition for agreeing to withdraw was Austria becoming a permanently neutral country. The roots of Austria's neutrality as traced in this volume were not only linked to Soviet, but also to Austrian considerations. Based on US, Soviet, British, French, German, Swiss and Austrian documents, the book analyzes the risks, pitfalls and blockades that had to be avoided and overcome before Austria could finally regain its independence and be reconstructed.
Visa hela texten

A Cold War over Austria is a magnificent exploration of the origins of Austrian postwar independence, charting the slow and often tortuous processes leading to the formation of the State Treaty of 1955, but also a providing a probing examination of the broader ideological matrices and strategic networks that defined postwar diplomacy among the victorious, but rival Allies. This book constitutes a fascinating case study for the political history of postwar international relations in Central Europe between 1945 and 1955, but it also offers many valuable and original insights into the murky world of post-1945 Austrian domestic politics as well. This is an authoritative book, written with a full and masterful command of a vast array of important historical sources. -- John W. Boyer, University of Chicago In A Cold War over Austria, Gerald Stourzh and Wolfgang Mueller provide a thoroughly revised and nicely translated updating of Stourzh's classic study of the genesis of the Austrian State Treaty of 1955. The authors have produced a clear, veracious, and superbly documented history of the attempt on the part of the Four Powers and of the Austrians themselves to find a solution to the complex and entangled Austrian problem. This important book should become standard reading for scholars and students of the Cold War in Europe. -- Norman Naimark, Stanford University