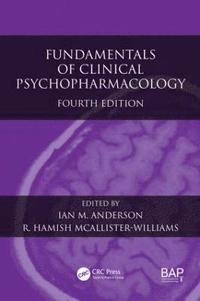 av Ian M Anderson, R Hamish Mcallister-Williams
Häftad Engelska, 2015-09-22
515
Köp
Spara som favorit
Finns även som
Visa alla 1 format & utgåvor
Fundamentals of Clinical Psychopharmacology provides up-to-date, evidence-based and unbiased information about psychopharmacology. It spans the range of the discipline, from mode of action and side effects of drugs to meta-analyses of clinical trials. It is anchored to practice guidelines produced by the UK National Institute for Health and Care Excellence (NICE) and the British Association for Psychopharmacology (BAP). Care has been taken to provide an international perspective that makes it equally useful to practitioners in the US and other countries. The book grew out of BAP courses that set the standard for professional psychopharmacological education in the UK. This latest edition is fully updated and provides, in a concise and easy-to-read format, key facts about currently used psychotropic drugs, set in the context of the neuroscience of the disorders they treat. It also includes a new chapter on the principles of psychiatric prescribing. Key references, including the clinical studies discussed, are provided at the end of the chapter along with suggestions for further reading. Intended to be a frequently updated, affordable, concise and practical resource, it meets the needs of trainees and practitioners seeking to keep abreast of the state of the art in psychopharmacology.
Visa hela texten

"Well-designed, well-written and well-edited reference book... a concise reference that achieves its stated aim of delivering an up-to-date review of the most current understanding of the state of psychopharmacology to meet the needs of the busy senior practitioner but also trainees." - (Winner of Psychiatry Category, BMA Medical Book Awards 2016) "This is an excellent resource that is easy to read, succinct but complete, and is based solely on research findings. I have read many psychopharmacology books, but this is one of the best because of how well it compiles a vast amount of information in short chapters. While the chapters about specific medications and conditions are well written, the chapters on research and basic prescribing practices are exceptional and complement the other chapters." -Aaron Plattner, MD, Doody's Book Reviews

Edited by Ian M. Anderson, BA, MA, MBBS, MD, MRCP(UK), FRCPsych, is a professor of psychiatry in the Neuroscience and Psychiatry Unit at the University of Manchester, UK. He also is an honorary consultant psychiatrist at the Manchester Mental Health and Social Care Trust, UK. Dr. Anderson founded the Specialist Service for Affective Disorders in Manchester and was its director until 2011. His research interests include the aetiology and treatment of mood disorders, the mechanism of action of antidepressants and evidence-based psychiatry. He chaired the guideline development group for the 2009 update of the NICE depression clinical guideline and is an author on several consensus treatment guidelines from the British Association for Psychopharmacology (BAP). He is a past general secretary of the BAP. R. Hamish McAllister-Williams, BSc, MBChB, PhD, MD, FRCPsych, is a reader in clinical psychopharmacology at the Institute of Neuroscience in Newcastle University, UK. He is also an honorary consultant psychiatrist in the Regional Affective Disorders Service at the Northumberland Tyne and Wear NHS Foundation Trust, UK. Dr. McAllister-Williams is the lead consultant in the tertiary level Regional Affective Disorders Service based in Newcastle for patients with treatment-refractory mood disorders. His research focuses on the pathophysiology and treatment of both bipolar and unipolar affective disorders, and he is an author of the British Association for Psychopharmacology (BAP) consensus guidelines for treating depression. He is a past general secretary of the BAP and was appointed its director of education in 2012.