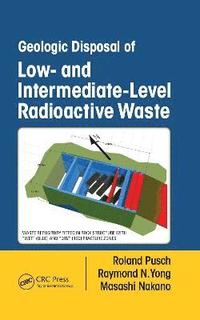 av Roland Pusch, Raymond N Yong, Masashi Nakano
Inbunden Engelska, 2017-04-21
1879
Köp
Spara som favorit
Finns även som
Visa alla 2 format & utgåvor
This book will address concepts and techniques for preparation and disposal of low- (LLW) and intermediate-level (ILW) radioactive waste from the nuclear industry, the weapons industry, university labs, research institutes, and from the commercial industry. It will aid decision-makers in finding optimal technical/economical solutions, including how site investigations, design, construction, identification and selection of construction materials (clay and concrete), and monitoring can be made. It will also examine techniques for isolating soil and rock contaminated by leaking nuclear plants and from damaged nuclear reactors such as those at the Fukushima and Chernobyl nuclear plants.
Visa hela texten

"Geologic Disposal of Low- and Intermediate-Level Radioactive Waste is very valuable.... IAEA published the technical reports on disposal of Low-and Intermediate-Level radioactive waste. But this book is obviously more instructive for the studies of disposal and safety management of radioactive wastes generated form NPPs. It would also ensure the confidence of publics respecting to the safety operation of reactors." - Xiaodong Liu, East China University of Technology, Shanghai, China "I believe that this book will be a new chart for the future radioactive disposal management." - Masashi Kamon, Research Institute for Environmental Geotechnics, Japan "Many works on radioactive waste management focus on specialist details. Geologic Disposal of Low- and Intermediate-Level Radioactive Waste provides the fuller picture. This book takes radioactive waste management from the sphere of the researcher to reality in the field." - Stephan Jefferis, Environmental Geotechnics Ltd., Oxford, United Kingdom "I was favorably impressed by the thoroughness, recommendations, and case history illustrations of discussed topics; i.e., site investigation, design schemes, construction considerations, and monitoring for LLW and ILW disposal both above and underground in soil or rock. The book is a valuable, understandable source for engineers dealing with the design of economical solutions to the disposal of nuclear wastes." - Frank C. Townsend, University of Florida, USA "This is a valuable reference for practitioners and researchers involved in the design of safe, long-term disposal of low- and intermediate-level radioactive waste. In addition, the book's clear and comprehensive approach allows for seamless integration of the material in graduate-level courses." - Kristin M. Sample-Lord, Villanova University, Pennsylvania, USA

Dr. Roland Pusch received his PhD in soil mechanics (KTH) and a PhD in geology (Stockholm University), and was appointed as chief engineer and head of the research division of the Swedish Geotechnical Institute from 1963 to 1967. He then served as an associate professor at Chalmers University of Technology, and as professor at the Technical University at Lulea. He is presently professor emeritus and engaged as adjunct professor at this university since 2012. He coordinated two EU projects "Microstructure and chemical parameters of bentonite as determinants of waste isolation efficiency" (1995-1998) and "Low Risk Disposal Technology" (2000-2003), and was associate coordinator of the EU project "Cluster Repository Project" (CROP), 2000-2003, summarizing the experience from national projects concerning disposal of HLW and long-lived species in LLW and MLW. He has authored five geoscientific books: Waste disposal in rock, Rock mechanics on a geological base both for Elsevier, Microstructure of smectite clays and engineering performance (together with R N Yong) for Taylor & Francis, Geological storage of radioactive waste for Springer, and High-level radioactive waste disposal for WIT Press. The latest was Bentonite Clay for Taylor & Francis, published in 2015. The total number published technical and scientific papers is about 200. Dr. Masashi Nakano received a PhD in Agriculture from the University of Tokyo. He has been a Member of the Science Council of Japan, President of Japanese Society of Agricultural Engineering, and Chairman of Technical Advisory Committee on Environmental Remediation of Closed Uranium Mine (JAEA). He has won numerous awards for his work, including Science and Engineering Award, Japanese Society of Irrigation, Drainage and Reclamation, the Yomiuri Award, Japan Agriculture Science Union Award, Distinguished service medal from the Japanese Geotechnical Society, Distinguished paper award from the Clay Science Society of Japan. He is also a member emeritus of both Japanese Society of Irrigation, Drainage and Reclamation and the Japanese Geotechnical Society. He is Professor Emeritus, The University of Tokyo. Raymond Yong (William Scott Professor Emeritus, McGill University), was trained both in the United States and Canada. He received his BA in Mathematics/Physics at Washington and Jefferson College, his BSc in Civil Engineering at the Massachusetts Institute of Technology, his MSc in Material Sciences at Purdue University, and his MEng and PhD at McGill University. He has won many awards and prizes in the US and Canada. Amongst these is the KILLAM Prize, Canada's highest and most prestigious Scientific Prize. He has been conferred the title of "Chevalier de l'Ordre National du Quebec" by the government of Quebec, and is a Fellow the Royal Society of Canada [FRS(C)]. Other significant awards include the Canadian Environmental Achievement certificate of Honour, awarded by the Canadian Government (Environment Canada); the LEGGET prize - which is the highest prize awarded by the Canadian Geotechical Society, and the ASTM DUDLEY prize.

Radioactivity and Radioactive Substances. Introduction. Low-level and Intermediate-level Radioactive Wastes. Definition, Characterization and Classification of LLW and ILW. Health Effects of Electromagnetic Radiation on Biological Objects. LLW-ILW Management and Regulatory Requirements. Handling and Transport of LLW and ILW. Isolation of LLW and ILW. Regulatory Requirements. Management-Disposal Schemes. Systems for Transport and Temporary Storage of LLW and ILW. Site Investigation and Principles of Site Assessment. Licensed, Constructed and Operating Systems for Disposal of LLW and ILW. Worst Possible Scenarios. Ground Stability, Longevity of Isolating Components. Science-Engineering-Technological Background and Development for Selection of Optimal Waste Isolation System. Identifying Processes and Mechanisms in Candidate LLW and ILW Waste Isolation Systems. Conceptual and Theoretical Modelling of the Performance of Systems. Safety and Long-Term Issues. Topographic and Hydrological Changes of the Transport Paths of Chemicals. Degradation of Isolating Components of Systems for Disposal of LLW and ILW. Selection and Application of Dose Criteria for Public and Governmental Acceptance of Systems. Risk of Radioactive Contamination in Shallow Ground.