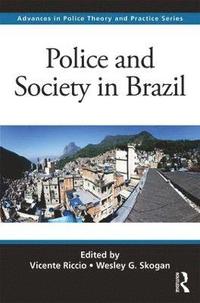 Police and Society in Brazil

av Wesley G Skogan, Vicente Riccio
Inbunden Engelska, 2017-10-02
1449
Köp
Spara som favorit
Skickas inom 7-10 vardagar.
Fri frakt inom Sverige för privatpersoner.
Finns även som
Visa alla 3 format & utgåvor
In Brazil, where crime is closely associated with social inequality and failure of the criminal justice system, the police are considered by most to be corrupt, inefficient, and violent, especially when occupying poor areas, and they lack the widespread legitimacy enjoyed by police forces in many nations in the northern hemisphere. This text covers hot-button issues like urban pacification squads, gangs, and drugs, as well as practical topics such as policy, dual civil and military models, and gender relations. The latest volume in the renowned Advances in Police Theory and Practice Series, Police and Society in Brazil fills a gap in English literature about policing in a nation that currently ranks sixth in number of homicides. It is a must-read for criminal justice practitioners, as well as students of international policing.
Visa hela texten

Vicente Riccio is a Professor in the graduate program of Law and Innovation at Federal University of Juiz de Fora, Brazil. He also has worked as a consultant for many public institutions in Brazil, such as the Ministry of Justice, Public Security Secretary of Rio de Janeiro, and the Civil Police of Amazonas, among others. He has coordinated many educational programs for police officers and criminal justice professionals in different states of Brazil. His research interests cover diverse topics such as police reform, police cultures, legal systems in developing democracies, media and justice, and video evidence. Wesley G. Skogan is Professor of Political Science and a Faculty Fellow of the Institute for Policy Research at Northwestern University. His research focuses on policing, community responses to crime, victimization, and fear of crime. He is a Fellow of the American Society of Criminology, and was a Senior Fellow of the Center for Crime, Communities, and Culture of the Open Societies Institute. He organized the Committee on Police Policies and Practices for the National Research Council and served as its chair. He is the co-author (with Kathleen Frydl) of the committee report Fairness and Effectiveness in Policing: The Evidence. Earlier, he spent two years at the National Institute of Justice as a Visiting Fellow. In 2015, he received the Distinguished Achievement Award in Evidence-Based Crime Policy from the Center for Evidence-Based Crime Policy.