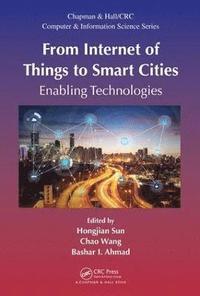 From Internet of Things to Smart Cities

Bloggat om From Internet of Things to Smart Cities

Hongjian Sun (S'07-M'11-SM'15) received his Ph.D. degree from the University of Edinburgh (U.K.) in 2011 and then took postdoctoral positions at King's College London (U.K.) and Princeton University (USA). Since 2013, he has been with the University of Durham, U.K., as a Lecturer (now Assistant Professor) in Smart Grid. His research mainly focuses on: (i) Smart grid: communications and networking, (ii) Smart grid: demand side management and demand response, and (iii) Smart grid: renewable energy sources integration. He is on the Editorial Board of the Journal of Communications and Networks, and EURASIP Journal on Wireless Communications and Networking. He also served as Guest Editor for IEEE Communication Magazine for 2 Feature Topics. To date, he has published over 80 papers in refereed journals and international conferences; He has made contributions to and coauthored the IEEE 1900.6a-2014 Standard; He has published five book chapters, and edited IET book "Smarter Energy: from Smart Metering to the Smart Grid" (ISBN: 978-1-78561-104-9). Chao Wang received the B.E. degree from the University of Science and Technology of China, China, in 2003 and the M.Sc. and Ph.D. degrees from the University of Edinburgh, U.K., in 2005 and 2009, respectively. In 2008, he was a Visiting Student Research Collaborator with Princeton University, USA. From 2009 to 2012, he was a Postdoctoral Research Associate with KTH-Royal Institute of Technology, Sweden. He is currently an Associate Professor with the School of Electronics and Information Engineering, Tongji University, China. His research interests mainly lie in information/communication theory and signal processing for wireless networks, as well as their applications to next-generation mobile communication systems. So far Dr. Wang has authored/co-authored 50+ scientific papers. In 2014, he was awarded as the Shanghai Pujiang Talent by the Shanghai government. He was invited to serve as the symposium TPC chair at CHINACOM'15, workshop Panel Co-Chair at IEEE VTC'16 Spring, Publicity Co-Chair at IEEE CYBCONF'17, and TPC member at 23 international conferences.