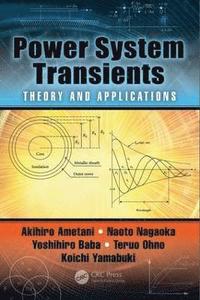 av Akihiro Ametani, Naoto Nagaoka, Yoshihiro Baba, Teruo Ohno, Koichi Yamabuki
Inbunden Engelska, 2016-11-14
2369
Köp
Spara som favorit
Finns även som
Visa alla 3 format & utgåvor
This new edition covers a wide area from transients in power systems-including the basic theory, analytical calculations, EMTP simulations, computations by numerical electromagnetic analysis methods, and field test results-to electromagnetic disturbances in the field on EMC and control engineering. Not only does it show how a transient on a single-phase line can be explained from a physical viewpoint, but it then explains how it can be solved analytically by an electric circuit theory. Approximate formulas, which can be calculated by a pocket calculator, are presented so that a transient can be analytically evaluated by a simple hand calculation. Since a real power line is three-phase, this book includes a theory that deals with a multi-phase line for practical application. In addition, methods for tackling a real transient in a power system are introduced. This new edition contains three completely revised and updated chapters, as well as two new chapters on grounding and numerical methods.
Visa hela texten

Akihiro Ametani earned his PhD from the University of Manchester (UMIST), Manchester, UK in 1973. He was with the UMIST from 1971 to 1974 and with Bonneville Power Administration for summers from 1976 to 1981. He developed the EMTP (Electro-Magnetic Transients Program). Since 1985, he has been a professor at Doshisha University, Kyoto, Japan. In 1988, he was a visiting professor at the Catholic University of Leuven, Belgium. From April 1996 to March 1998, he was the director of the Science and Engineering Institute, Doshisha University, and dean of the Library and Computer/ Information Center from April 1998 to March 2001. He was chairperson of the Doshisha Council until March 2014. Since April 2014, Dr. Ametani has been an Emeritus Professor at Doshisha University, and he is also an invited professor at Ecole Polytechnique Montreal, Montreal, Canada. He is an IEEE Life Fellow and CIGRE distinguished member. Naoto Nagaoka earned BS, MS, and PhD degrees from Doshisha University, Kyoto, Japan, in 1980, 1982, and 1993, respectively. In 1985, he joined Doshisha University, where he has been a professor since 1999. From April 2008 to March 2010, he was dean of the Student Admission Center, Doshisha University. From April 2010 to March 2012, he was director of the Liaison Office and the Center of Intellectual Properties, Doshisha University. Dr. Nagaoka is a member of the Institution of Engineering and Technology and the Institute of Electrical Engineers of Japan. Yoshihiro Baba earned his PhD from the University of Tokyo, Tokyo, Japan, in 1999. Since 2012, he has been a professor at Doshisha University, Kyoto, Japan. He received the Technical Achievement Award from the IEEE EMC (Electromagnetic Compatibility) Society in 2014. He was the chairperson of Technical Program Committee of the 2015 Asia-Pacific International Conference on Lightning, Nagoya, Japan. He has been the convener of C4.37 Working Group of the International Council on Large Electric Systems since 2014. Dr. Baba has been an editor of the IEEE Transactions on Power Delivery since 2009, and an advisory editorial board member of the International Journal of Electrical Power and Energy Systems since 2016. Teruo Ohno earned a BSc from the University of Tokyo, Tokyo in electrical engineering in 1996, an MSc from the Massachusetts Institute of Technology, Cambridge in electrical engineering in 2005, and a PhD from the Aalborg University, Aalborg, Denmark in energy technology in 2012. Since 1996, he has been with the Tokyo Electric Power Company, Inc., where he is currently involved in power system studies, in particular, on cable systems, generation interconnections, and protection relays. He was a secretary of Cigre WG C4.502, which focused on technical performance issues related to the application of long HVAC (high-voltage alternating current) cables. Dr. Ohno is a member of the IEEE (Institute of Electrical and Electronics Engineers) and the IEEJ (Institute of Electrical Engineers of Japan). Koichi Yamabuki earned a PhD from Doshisha University, Kyoto, Japan, in 2000. Since 1999, he has been with National Institute of Technology, Wakayama College. He was a visiting researcher of the University of Bologna, Bologna, Italy from 2006 to 2007. His research area includes experimental and analytical investigation on surge phenomenon due to lightning strikes and grounding conditions on power and transportation facilities. Dr. Yamabuki is a committee member of IET (Innovation, Engineering, and Technology) Japan Network, a member of IEEE, and a member of IEEJ.